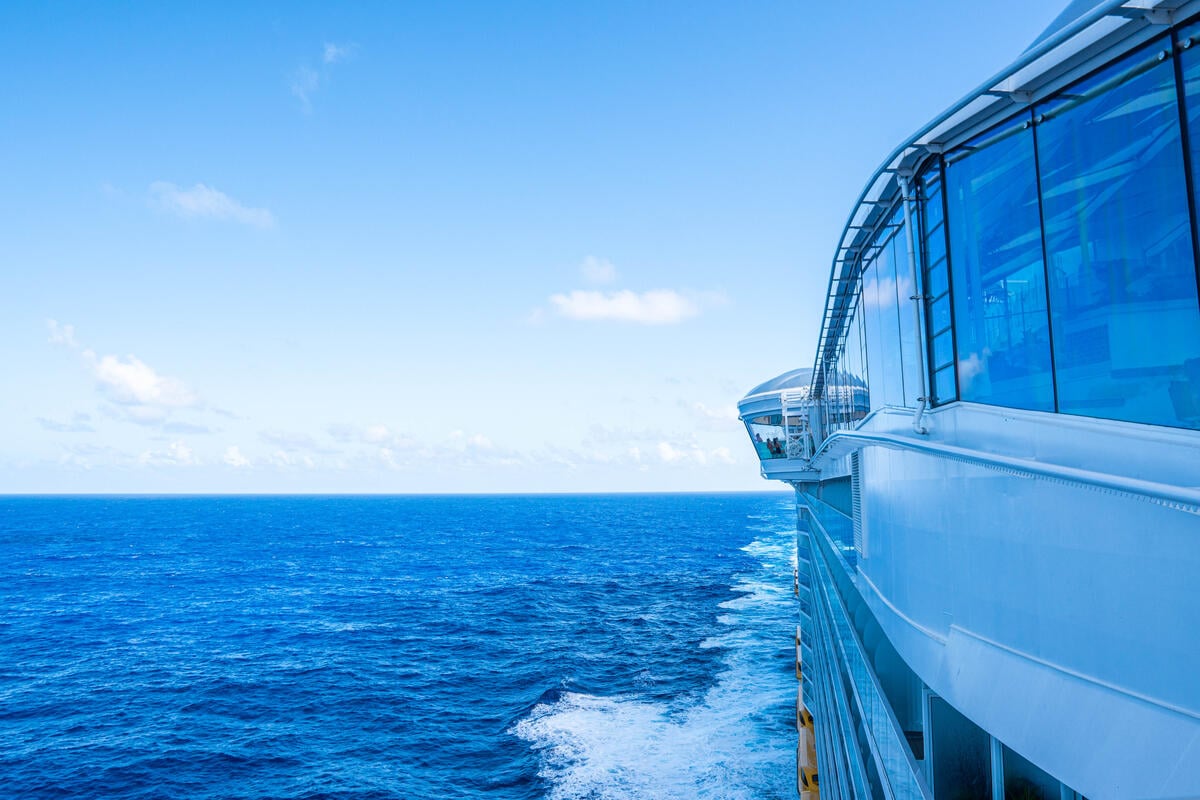 Today is day five of Wonder of the Seas and our second day at sea. Although I didn’t have a plan for the day, I was looking forward to some relaxing time on board.

I started my morning in Central Park. It quickly became one of my favorite spots on Wonder of the Seas for its peaceful atmosphere and open space.

I find that I cross the Royal Promenade much less on Oasis class ships to go side to side, instead choosing to cross Central Park. 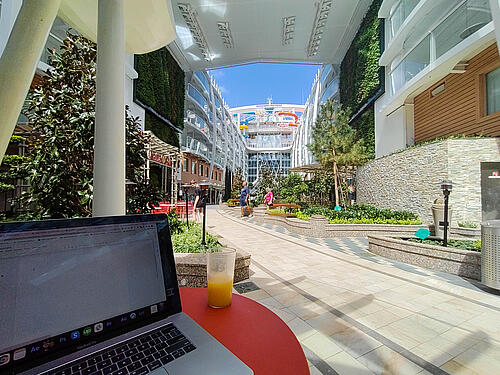 Lunch today was at Giovanni’s Italian Kitchen. As usual, lots of carbs were eaten and everything was delicious. I prefer the pizza menu to the pasta here, and the margherita pizza really hit the mark. 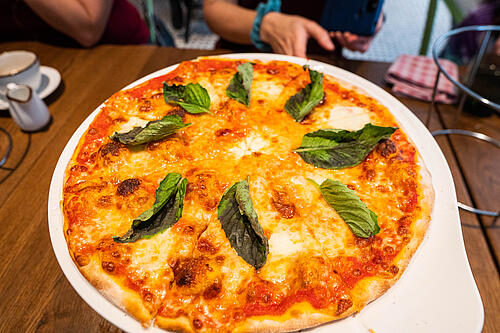 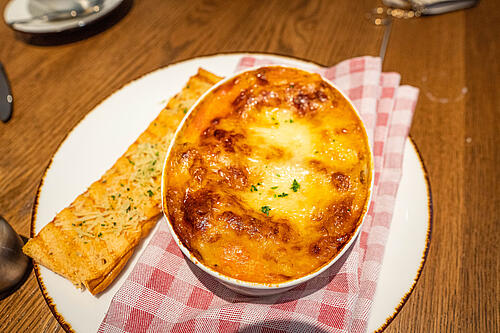 After lunch, I took a walk around Wonder of the Seas to further explore the ship. I was surprised to see the sexiest man alive contest taking place on the pool deck.

Many of the pool activities that draw crowds were put on hold when the cruise restarted due to Covid protocols, so it’s exciting to see things back to normal. The competition was actually a lot more entertaining than I expected too, with men trying to impress the female judges with their “sexy” dance moves.

In fact, I burst out laughing several times at how ridiculous the performances were! 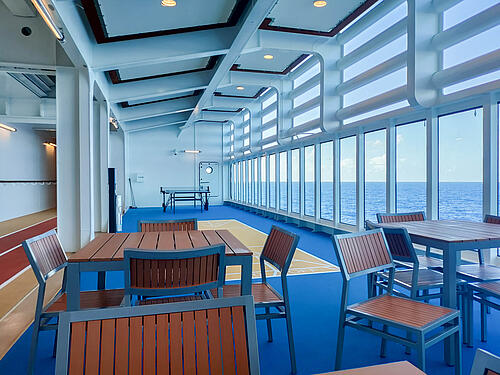 Then I hung out in one of Wonder of the Seas’ hidden secrets, the seats on the race track. Like Central Park, it’s one of my favorite places on board to relax away from the crowds and take in spectacular ocean views. There is also a table tennis table and shuffleboard for guests to enjoy.

Later in the afternoon, I walked to the Sports Deck to watch the sunset. I love the seats aft of the Sport Deck, which have a great view of the ship’s wake, and I spent time here relaxing before dinner. 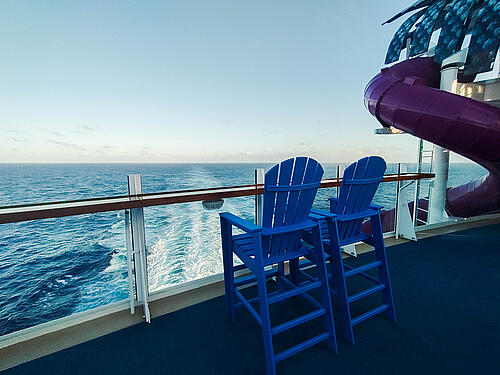 Since I had to return from the Sports Deck to my cabin, I opted for a more thrilling adventure than taking the stairs: the Ultimate Abyss.

The Ultimate Abyss is one of my favorite onboard activities, and it’s even more fun than it looks. Needless to say I got to the boardwalk much quicker than if I had taken the elevator. 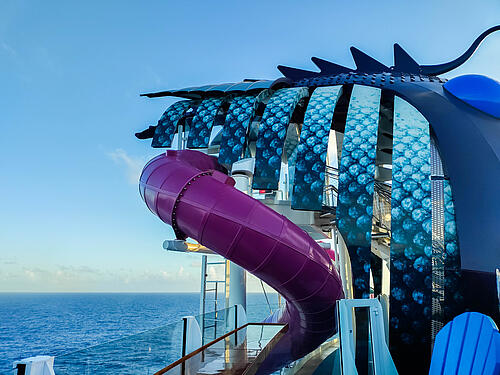 Dinner tonight brought us to 150 Central Park. I had never tried this specialty restaurant before so was curious to give it a try.

150 Central Park has a limited menu, which I generally consider a good sign that all dishes have been well thought out and prepared. 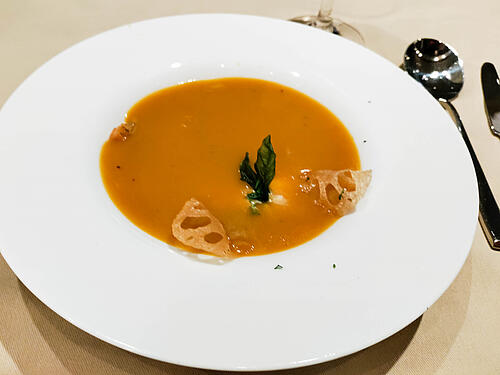 I ordered the roasted pumpkin spice bisque to start my meal. Rich, sweet and salty at the same time, it far exceeded my expectations.

For main, I tried the cauliflower steak and seared halibut, and the fried cheesecake might be the best dessert I’ve tried on Royal Caribbean so far. 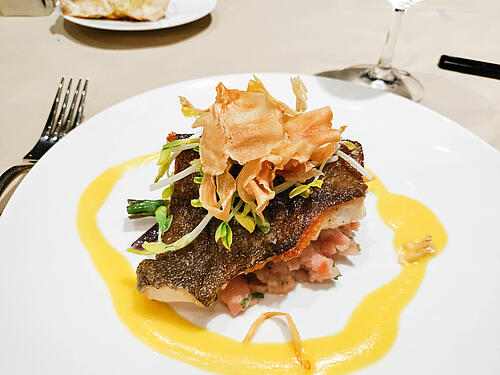 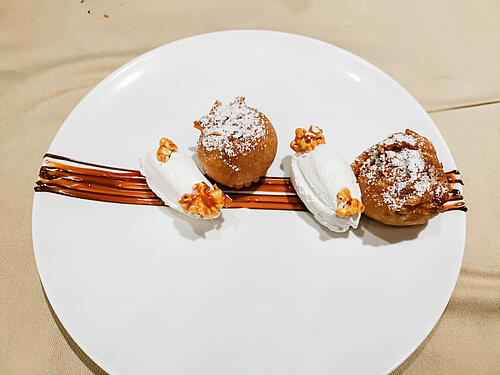 What I like about 150 Central Park is that the menu consists of dishes that I wouldn’t usually order. For example, I would never think of placing roasted cauliflower on a bed of Greek yogurt, pumpkin seeds and thyme, but the flavors blend perfectly. 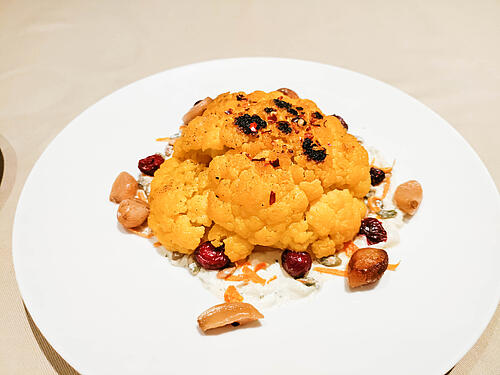 As the restaurant focuses on high classic entrees and local ingredients, it offers some of the highest quality dishes I have tried on Royal Caribbean.

I ended the evening listening to live country music at the Mason Jar, followed by acoustic guitar at the pub. Tomorrow we will be in Nassau.

With around 4,200 passengers on board, this cruise feels more like a “real cruise” compared to the lower capacity cruises I’ve taken since the restart.

While I thought having more passengers on board would make me enjoy the experience less, I actually like the livelier atmosphere found throughout the ship.

My cabin is close to the elevators which makes it easy to get to and from my cabin.

On previous cruises, I always had to walk further from the stairs or elevators to my room, and it could be a pain to have to grab something quickly. Also, I don’t hear much, if any, noise from the elevators and hallway.