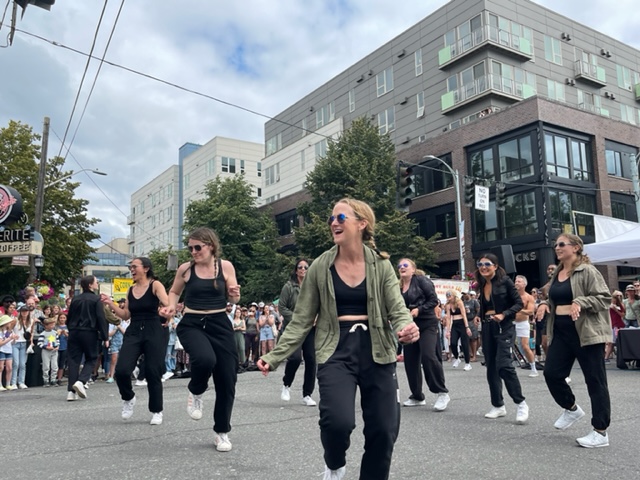 DancePowered performs a tour de force in the heart of the Summer Fest. pic.twitter.com/uBXVzvBEY5

Jennifer CepedaFitness classes have been very popular for a long time. Jennifer tells us that she has been working there since January!

Also big this afternoon – quite crowded for West Seattle THEIR:

THEM on the main stage of the Summer Fest! pic.twitter.com/3SKKgA7Idr

Here is the musical program for the rest of the day/night:

And at 7 p.m. in Elliott Bay, North. It’s also happening: come and meet Seal keepers here in the information booth. …more coverage to come; the festival continues until 8 p.m. tonight (music until 10 p.m.)!

4 p.m.: Latest weather news – it is now partly sunny, after a rather cloudy day. …. As you walk through Summer Fest, you’ll notice the booths are a mix – some fair/festival devotees, but also local businesses whose stores/offices are elsewhere in West Seattle, here to show up at more than neighbors. Among them are several West Seattle sponsors – Camp Crocket is a home for your dogs, with locations like Delridge and Upper Morgan: This is vanessa from Camp Crockett. We also said hello to sweep and Alice of Berkshire Hathaway HomeNorth West Real Estate Servicesserving West Seattle and surrounding areas from offices in Jefferson Square: Nina is at the festival for Canna Culture Shopbetween The Junction and Morgan Junction: Long-time sponsor of the WSB Click on! Design that adapts is having a sidewalk sale outside his store at 4540 California SW – including these West Seattle = Best Seattle T-shirts in partnership with Alair (we’ve flagged them before) 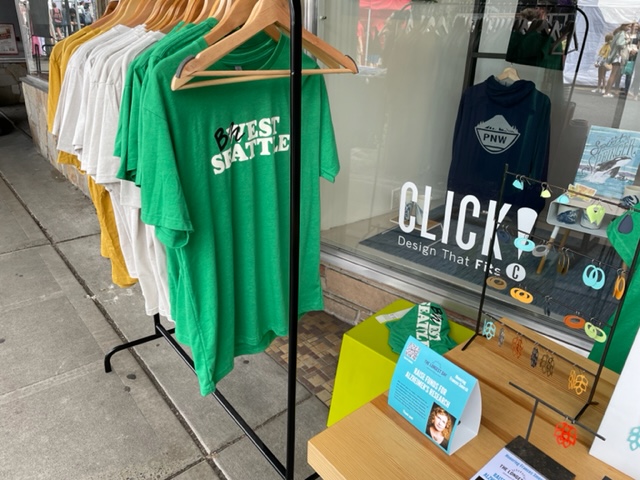 The sidewalk display at Click! also includes earrings which, along with the t-shirts, are part of a fundraiser for the Alzheimer Association in honor of the co-founder and artist Frances Smersh. …another WSB sponsor with a special feature for Summer Fest, Verity Credit Union (4505 California SW) has a design you can enter: Not far north of us in California/Alaska, meanwhile, the trombone-playing busker is back for a second day…”

… just like what one might call the proselytizing itinerant musician. Although planning for Summer Fest has been underway for months, there are always surprises along the way.

Near dinner time. Judging by what people are carrying, it looks like roasted corn, and bulb boba tea is very popular. Also of note, the sun has gone back to hiding and it’s a little windy, so you might want a sweater tonight. Festival maintenance is also ongoing – it takes a lot of help behind the scenes to power an event of this magnitude: Here at the Info Booth we have information on more than what’s happening at the festival – we have a poster for the return of Outdoor Movies in West Seattle also – they start next week, five Saturday nights in a row: There’s a change from the series’ first word – the July 23 film will be at Camp Long, then the next four in the courtyard of the Hotwire Coffee (long ago the series’ home) – until next Saturday!

6:54 p.m.: Lots of interest in late-substitute band Down North performing in Elliott Bay at 7 p.m., judging by the inquiries here. Plus, we’ve continued a long tradition…any contestant who stops at the information booth gets a photo—the first and only contestant we’ve seen is State Sen. Joe NguyenSo here is the illustrated proof: This year’s primary is only two and a half weeks away. If you’re a candidate, come see us at the information stand during the festival (we’ll be back tomorrow). …other sightings in the past few hours included Lori McConnell and Tim McConnellowners of West Seattle Runner (sponsor of the BMS), who are one week away from presenting the return of the 5K Dodger Floatbefore the Great West Seattle Parade. There is still time to register to walk/run (Go here to register) – the product benefits the West Seattle Food Bank.

8:24 p.m.: Back at HQ, we add some earlier music videos – some online above – but first, here’s Down North on the Elliott Bay stage: