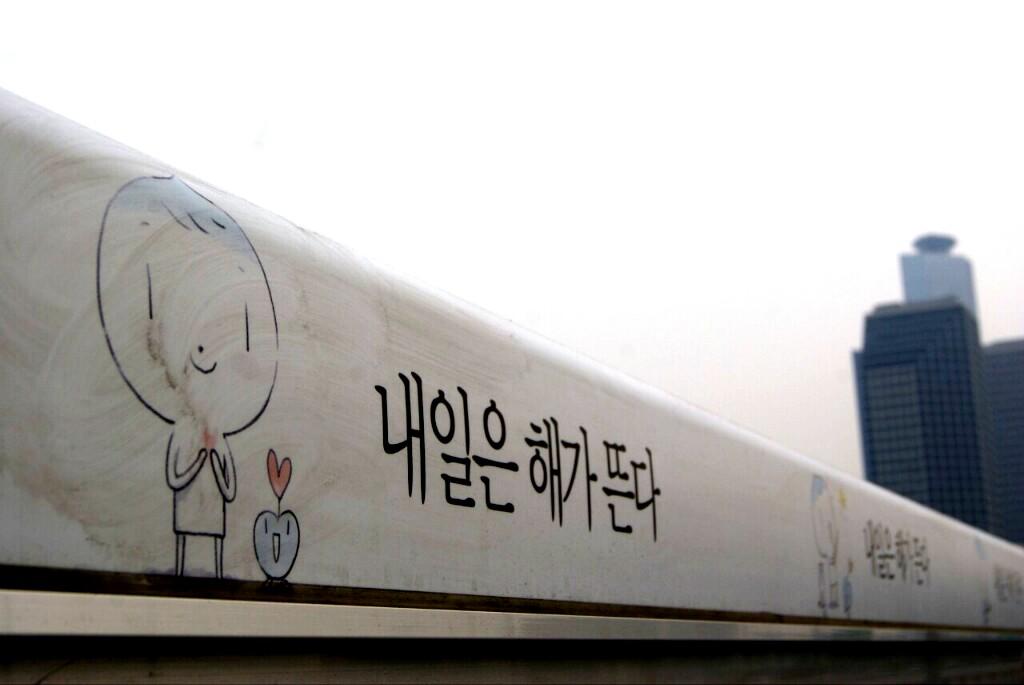 ODT reporter Sarah Marquet writes a blog about life in Seoul, Korea. With funding from the Asia New Zealand Foundation, she worked in the newsrooms of one of South Korea’s largest newspapers, the Joong Ang Daily, for six weeks.

Images of food and people adorn the railings of Mapo Bridge in Seoul, interspersed with phrases and questions such as “have you eaten?” And “think of the faces of your family”.

By the way, they light up.

On one side, about halfway up, is a bronze sculpture of an old man showing affection by pinching the cheek of a younger man.

There are also two telephones, an SOS button and plaques proclaiming that this is the “Bridge of Life”.

Because two years ago it was commonly called “suicide bridge”.

These facilities were how the Seoul city government tried to tackle the problem, rather than putting up tall fences.

According to various media, city officials did not want a “bandage”. They wanted a new solution.

South Korea has the highest suicide rate in the OECD, a rate that has doubled over the past 20 years to an average of 43 per day.

According to Statistics Korea, it’s the leading cause of death for people in their 20s and 30s, and more than two-thirds of those people are men.

Although it is not the leading cause of death among the elderly, it is prevalent in this age group.

With input from mental health professionals and funding from Samsung, the city government unveiled the facilities in September of last year.

On one side of the bridge, messages begin with questions such as “How are you?” ” “Did you eat?” and phrases like “it’s nice to walk along a bridge”.

There is a covered wooden rest area where you can sit and watch the river, an often hazy sight, as cars pass behind you.

Next, photos of various Korean foods. “Which one is your favorite?” asks the bridge before apologizing for the food that is not real.

As the first phone approaches, the questioning changes direction: “Do you have a secret? Then a phone connected to a 24-hour advice line.

Further on, facilities on the bridge talk about the weather and show more photos, this time of happy people.

“Think about the faces of your family… Their noses… Their eyes…

“Isn’t there someone you miss right now?”

“How about we go see them, rather than think about them.”

I couldn’t find any information as to whether the rate of this bridge has dropped since the installation of messages, pictures, sculptures, and phones, but there has been some criticism – especially that if someone is depressed because he has lost a family member, seeing pictures and messages about the family can make them more depressed.

As to the causes, there is a lot of speculation. It seems almost impossible to identify a reason.

Some of the suggested causes are:

– There is intense pressure on people to succeed in school and work in a highly competitive culture. The youth unemployment rate is quite high in South Korea so it is important to get good grades and go to a good university. For men, it is especially important to have a good job in order to provide for their families, as is the Korean custom.

– Mental illness, stress and difficulty communicating in a “face rescue” culture. These subjects are still relatively taboo in Korean society where everyone wants to fit in, no one wants to break the mold and people are afraid of being stigmatized.

– Financial loss and / or unemployment.

Since the 1960s, South Korea has grown from one of the poorest nations on the planet to one of the richest (in terms of GDP). In the 1980s, as the country continued to industrialize, it had one of the lowest rates. There was work available and job security was pretty good.

Then the Asian financial crisis of 1997 hit and many people lost their jobs. Men, whose traditional role was to support their families, suddenly found themselves unable to do so.

The suicide rate has skyrocketed. Some have speculated that rapid industrialization, combined with traditional values, put a lot of stress on people.

Another factor in rapid industrialization is that adult children have found themselves increasingly unable to provide for their aging parents as is tradition.

Some, including the New York Times, use it to explain the high rate among the elderly – they feel they could be a burden on their families.

Traditionally, parents do whatever they can to help their children move forward in life. In recent years, that has included emptying their bank accounts and spending their savings on providing their children with the best possible education or helping them buy their first home. The idea is that in their later years they will live with their children and be looked after by them.

Now, in the days of high unemployment and small apartments, it is getting harder and harder to do.

There is a pension fund but it is relatively new (it was created in the 80s) and to get it a person has to prove that their children cannot or do not want to support them which can be difficult to to do in a culture that is everything to save face.

* For help or information on suicide prevention, contact Lifeline on 0800 543-354 or www.lifeline.co.nz

Maria Goretti on her blog about cooking, fitness and more

Grab Your Jackets Travel Blog: Thanksgiving with Family and Friends

Tips for starting your own travel blog