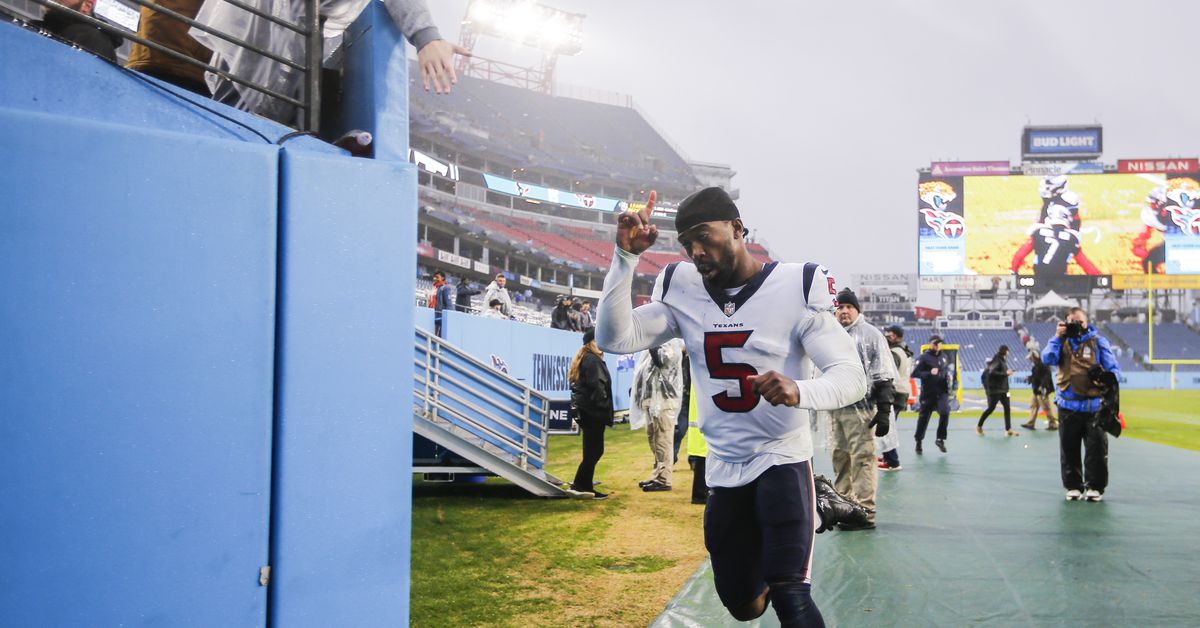 Totally Not Fake News: Victory for all

Houston, TX – A strange feeling settled in the offices of NRG Stadium and the Houston Texans last week. “That was weird, man…” observed an anonymous staff member. “There was a feeling of something that we haven’t felt… since… maybe the preseason. No, wait, even newer than that… Week 1 !!! Holy cow… uh, holy Easterby… oops. The holiest and most blessed does not like to hear this reference since someone accidentally mistakenly sent him the 2nd Sura of the Quran. In any case, yes, that’s it. Real, honest to-[Easterby]…JOY!!!. No more burdening yourself with painful gameplay sequences. No more “you suck so bad at your game, you’ll be lucky to be competitive in a game, let alone get something like a win” for demotivating discussions. It’s strange, but so, so pleasant.

“Even the Bible studies went a lot better. For most of the season we have alternated between Jeremiah with all his “fall from Jerusalem and the arrogance of kings / going into exile to suffer on the road” and the regular recitations of the Old Testament law and ” eye for an eye “sorta thing. We could actually focus on a happier book. I think we had a soft spot for the book of Daniel, especially since we entered the lion’s den… or rather, the Cheap Backyard Moonshine Distillery, and came out not only alive, but stronger than ever! !! Nothing like an oven survival type action.

Another anonymous player noted “Hey, if we can continue, there’s a rumor that Coach Culley will let us read the Beatitudes. Wow !!! Wouldn’t it be so great to read and live the true positive message of the Book? “

When confronted with this news, Culley noted “Beatitudes my [Easterby]!!! You think i get gentle with these [Easterbys] just because they survived a team that was on a major meth withdrawal ??? The way these stupid like [Easterby] [Easterbys] played the second half, especially all those 3s and outs?!? They will be lucky if I let them even take a look at Revelation, let alone the positive messages of the New Testament. Do you want cheerful and light stuff? You have to earn it !!! “

While Culley spoke poetically about what his players were winning and all that, other owners of the Texans felt that even with all the hard work and glory of a major win, they might not get all the credit that ‘they deserve.

“Come on man !!! We gave this town the first win of November,” complained team CEO Cal McNair. “And we’re not just talking about the NFL. You’ve seen the rest of the teams in H-town this month. Of the city’s professional Big 4 franchises (yes, we count the Dynamo here), here is what we have for the city since November 1 and before the Texans perceive to save Houston’s honor:

“Now I got someone daddy paid to do my homework… uh, a college tutor, who did some numbers for me, because I’m still having trouble with calculators, and BOOM… this meant we snapped a 13-game Houston pro team losing streak to start the month. And not too early, as the Rockets seemed to be content to try and go zero in the month, ”McNair said.[Easterby] Myself, I made a mistake by putting on a series [Easterby] whipping up some pre-K punks from Angleton. They never saw a pure beast in Minecraft until they got a load of me !!! “

Apparently McNair was so taken with the Texans’ victory and the city’s losing streak that he asked City Hall to use the proposed route for the Astros World Series parade. I thought that would be a good idea. However, when Cal couldn’t guarantee more than the family and Jack Easterby would attend, the town quickly shut him down.

Maybe the city will change their tone if the Texans can build on last week’s victory with this week’s duel against the New Jersey Jets (ok, ok, it’s the NEW YORK Jets, but they didn’t play a home game across the NY / NJ border since Jimmy Hoffa’s leftovers helped lay the groundwork for the stadium in the Meadowlands). Apparently the Texans are favored in this game. It is not a common phenomenon, but we are not in a common era. Maybe a victory is in order? Dare we say, a winning streak?

Well, if Texans manage to switch to any of the gospels for future Bible studies, we at Totally Not Fake News will keep you, the reading public. As part of our mission, we will relay any news that is suitable for printing, and even if it is not, we will print it anyway.

Blog: Nothing is better with Turkey than security and good manners | Blogs