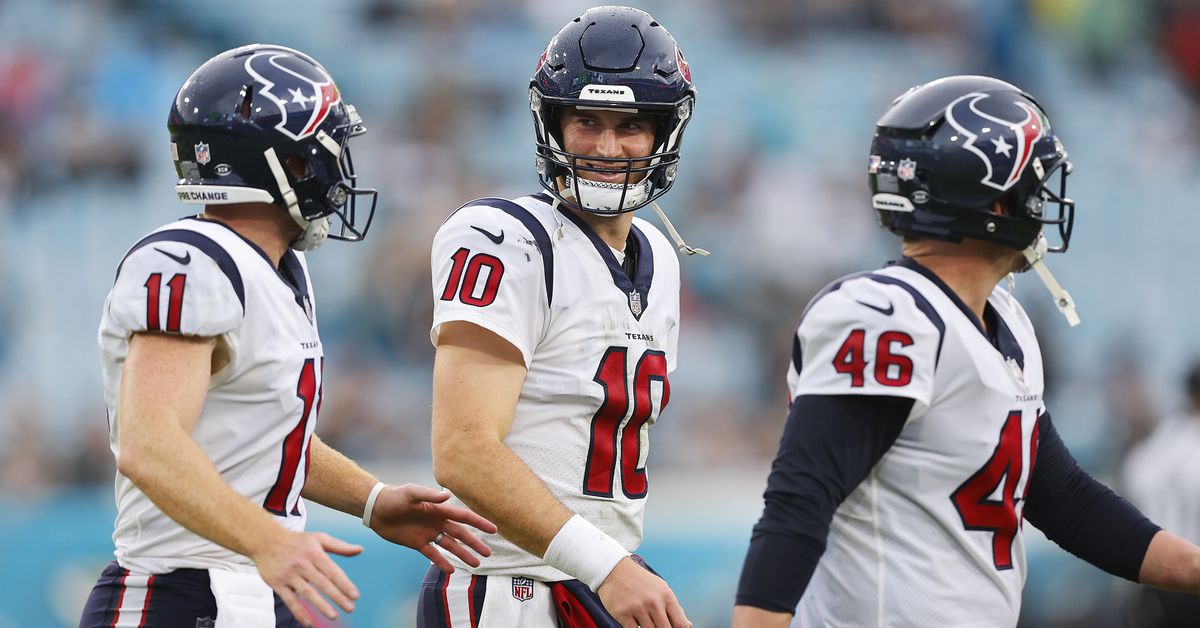 Houston, TX – For the third time this season, the Houston Texans will look to put together a certified winning streak. After their third victory of the season and their eighth straight win over Jacksonville, Houston certainly appeared in a good mood. “Great victory for the team, for the city of Houston and for the glory of the Word, as the prophet Jack Easterby predicted! Exclaimed head coach David Culley, who seemed to catch up and immediately added “and when I talk about Prophet Jack Easterby I don’t mean he has direct control over the entire course of the team, including communication with the GM during the game, who in turn communicates to me about how to train, or the basics like what to call timeouts or when to think about doing it on fourth downs, or just, you know, saying what to do. I don’t have to think… which is really hard, if I think about it… ouch, now my head hurts.

When we asked Nick Caserio about it, he could only yell, ‘He’s a newbie head coach. Like all rookies, they’re going to hit the wall. Coaching fourteen full games as the main figurehead, uh, head coach … that’s a lot of guys. Can find himself in the brain drain very quickly, especially if he doesn’t know how to take care of his mind well enough over the course of a season.

For the Texans, it was a good day. Davis Mills was particularly dynamic, bouncing up and down on the plane ride home after the game according to reports. “We scored in the second half. I threw the ball well, didn’t I? Is not it ? Eh? Haven’t I Mr. Kelly I threw so much goooooooooddddd !!!! ”

“Yes Davis, you threw the ball well” sighed an exasperated Tim Kelly. “Now Davis, go to the break room and have some hot chocolate and Christmas cookies.” “After Mills rebounded, Kelly just unloaded” Mother[Easterby]!!! This kid won’t shut down [Easterby] at the top!!! He’s been like that for DAYS !!!! I tried increasing her juice with Benadryl, but no… it didn’t work. Now that Joey Bosa is out, this kid is going to be insufferable. Hopefully he gets everything he wants from Santa and he can sort it out. [Easterby] down.”

However, with the mention of Bosa, it conjures up a rather unfortunate reality in the NFL, and apparently the rest of the world. COVID-19 continues to hamper the all-important activity of playing NFL games. With the new and incredibly virulent omicron version of COVID spreading rapidly across the country, it was inevitable that NFL players would be affected. Three games from last week have been postponed, and currently, 14 Texas players are on the COVID-19 list.

[Ed Note: The numbers will continue to remain in flux, as individuals continue to go on and come off the list]

“It sucks to have to be away from the team and the game and everything, but hey, these things happen,” observed an anonymous player on the COVID list. “Although what is strange is that when my name was officially put on the list, I suddenly received a bunch of texts from Laremy. [Tunsil]. He hadn’t heard much from him since he came out with that injury or anything. But after that transaction he was like, “Hey man, you wanna go out? Do you train together? See if this plant can help fight omicron? ‘ It was quite strange. You would think he might not want to play for the team or something… ”

“Well, I guess Laremy is still trying to get back in shape, but we expect all players who don’t test positive and follow all of our carefully calculated rules to ensure a solid and disciplined game on the pitch. I’m sure he just failed to bond with his teammates and wouldn’t try to do anything to avoid dressing up trying to catch omicron, ”Coach Culley said.

“You can do it?” Justin Reid exclaimed. “You mean that’s all I would have to do to make it out [Easterby]abandoned land of a group[Easterby] of a team… Uh… go figure.

“Hey, let me know if Laremy understands this,” Brandin Cooks rang. “We are almost all vaccinated. It wouldn’t hurt … and I can rest for my new team, uh, next season.

[Ed Note: After this interview, Brandin Cooks joined several other players on the COVID list. When we at Totally Not Fake News reached out for comment, Cooks noted “Thank you Jesus!!! This is wonderfu…er, I mean I am very disappointed to have to miss another game or two where we will get crushed by a competent team. Oh well…I guess I’ll just have to wait until I play next season, probably in a different uniform. Now, if you’ll excuse me, I just got a call from Laremy…”]

At least since the publication of this article, the Chargers and Texans will get away with Boxing Day. Whether the tackle left by the franchise for the Texans is on the pitch or not, we’ll be monitoring progress and reporting on what’s happening on and off the pitch for this team.

Three and Out: Chargers-Texans predictions