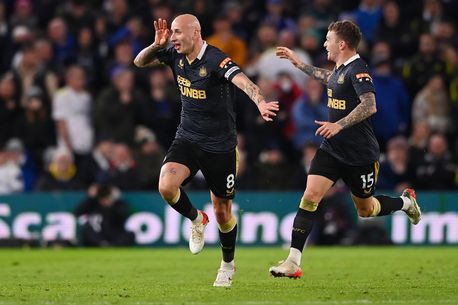 In what has been a rare occurrence this season, some Newcastle players have been named in Alan Shearer’s Team of the Week. Shearer hasn’t been shy with his Newcastle links as he selects three Magpies in Martin Dubravka, Fabian Schar and Jonjo Shelvey.

It’s only the third week that a Newcastle player has made it into Alan’s squad. Allan Saint-Maximin was selected for the home game against Leeds in September. Jamaal Lascelles picked up our only other win of this campaign against Burnley early last month.

Dubravka, Schar and Shelvey deserve some recognition for their performances in the 1-0 win at Leeds on Saturday. There are a few other candidates as well as Kieran Trippier was just outstanding.

Dubravka made a few key saves keeping only our second clean sheet of the season. He was aided by Fabian Schar’s warrior display. The 30-year-old was brilliant with 9 clearances, 2 interceptions and 2 blocked shots.

Jonjo Shelvey has made a massive change in midfield. It was an important display from the playmaker as Joelinton was sent off in the first half with a groin injury. Along with his goal, Shelvey had 2 tackles, 2 clearances and a blocked shot in an all-around performance.