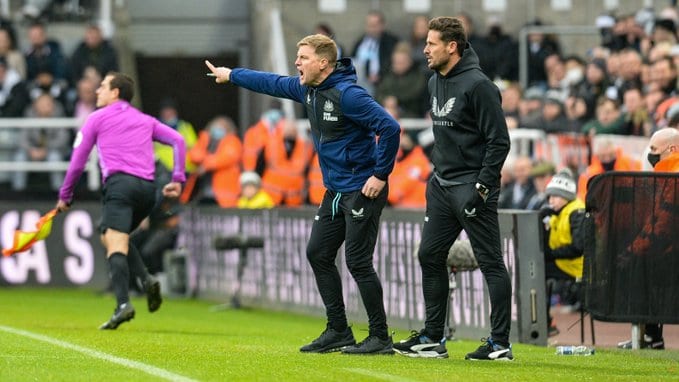 This is the team I predict Eddie Howe will name for this afternoon’s game at Manchester City. He has two changes since the 1-0 loss to Liverpool.

Eddie Howe revealed Callum Wilson and Kieran Trippier had a chance today, with Wilson being the more likely of the two. However, it seems doubtful whether either will start the match.

Howe was unhappy with Newcastle’s performance in front of goal last weekend. So we might see some changes in the top three. While Chris Wood has only scored twice, he’s the best candidate to lead the line until Wilson is fully fit.

Joelinton, although exceptional at Norwich, has become a sensation in midfield. He has started in attack for the past two weeks but is better suited for midfield against the league leaders.

There are only two Magpies ruled out with Wilson and Trippier likely to make the bench. Pep Guardiola could have a full squad to choose from if John Stones and Kyle Walker pass late fitness tests.

Our poll shows the majority of fans don’t expect the guys to derail the Man City train, with around 60 per cent predicting a loss. However, anything can happen and the Citizens are collapsing late in the Champions League.

Newcastle will have to be at their best this afternoon. It’s the toughest game on the calendar. A result would be a bonus, but a strong performance is needed to maintain optimism in the final weeks of this campaign.

A left-wing pastor has an abortion