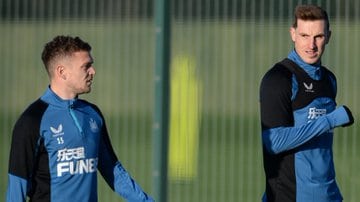 Jamaal Lascelles, Jamal Lewis and Matty Longstaff were spotted in the footage. Howe revealed that Lewis was closing in on a comeback. Here is the team news from the Newcastle Twitter account:

“We still have a few cases of Covid and we have testing today so fingers crossed no one succumbs there.

“We have Jamal Lewis and Paul Dummett getting closer to a comeback. We have a few knocks and troubles but nothing too serious.

Paul Dummett made the bench in our FA Cup loss so he could be ready for his season debut. If Lewis is available tomorrow, he would provide a huge boost on the left. The back four could then be Trippier, Schar, Lascelles and Lewis.

Howe was asked about his two new recruits. Chris Wood joined the club on Thursday while Trippier had his first full week at the club. Both immediately improve the team and should play a role against the Hornets tomorrow.

Here’s some of what Howe said about Trippier’s impact this week:

“On the training ground, he was excellent. From the first day he spoke to the group, he was extremely impressive.

“He showed a level of maturity and composure that we will need going forward. I know he will be a great recruit for us.

Howe must be salivating at the thought of Trippier putting crosses in the box for Wood to hang on to. The 30-year-old is a shrewd signing who solves a major short-term problem with Callum Wilson until March.

“We are really delighted with the signing of Chris. I think he will fit very well into the team. He has experience, he is ready to play and he knows the Premier League. It gives us something a little different.

“I’ve never been shy about saying that I admire great physical strikers who can give you a platform to play on and I’ve signed several over the years. When you look at last week when we put 30 crosses in the box, we were asking for someone with their strengths and qualities.

“I think he’s going to be hugely motivated to play well for Newcastle and help us get out of the position we’re in. He also has experience of it. He is also a person I admire – I was extremely impressed with his character and his attitude.

Tomorrow’s game is absolutely crucial. A win and Newcastle are out of the relegation places. It has just been announced that Burnley’s game against Leicester has been postponed with the Clarets suffering from a Covid outbreak.

Hopefully we can put a lot of crosses in the box that Wood can get in the end. Watford have lost seven games in a row in all competitions and are reeling at the moment. Although they have made four signings in this window.

Newcastle’s aim is to redeem themselves after the disappointing FA Cup exit. Howe thinks the guys are ready to fix it.

“We are going to win the game. Everyone linked to the club was disappointed last week. We were really keen to build momentum – we didn’t.

“We got together, we discussed what was wrong and we will try to fix it.”