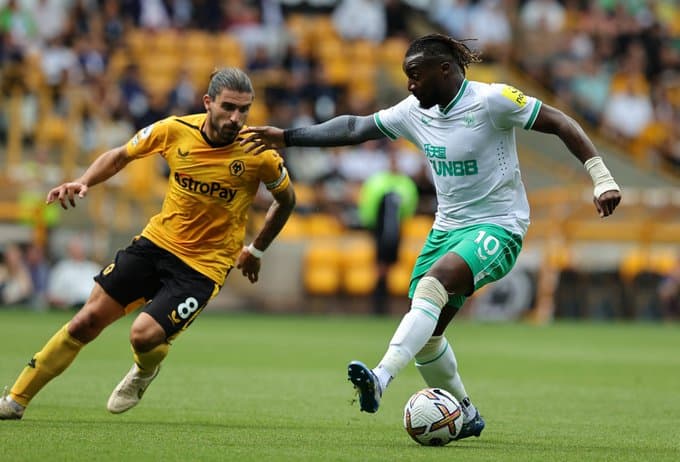 Eddie Howe gave his press conference ahead of tomorrow night’s game at Liverpool. He provided a slightly more positive update on Bruno Guimaraes than reported in the press.

Some reports have claimed that the Brazilian will be out of action for at least the next two matches. Howe says Bruno might have a chance for Saturday’s fight against Crystal Palace at St. James’ Park.

” He is fine. I don’t know about this game but I hope not long after if it doesn’t happen.

“He is very positive, in good spirits and he desperately wants to come back. He’s a great player for us, so we need to get him back as soon as possible.

Hopefully Guimaraes is back this weekend. His presence was sorely missed by Wolves. Although the guys managed to bring back a valuable point with Allan Saint-Maxmin’s late strike.

Unfortunately, Allan faces a late fitness test for tomorrow. He received a blow late in proceedings on Sunday. Saint-Maximin was taken off in the final minutes after feeling his hamstring.

Here’s Howe’s update on the Frenchman as well as Kieran Trippier, who also felt his hamstrings on Sunday:

“Maxi is a concern for us at the moment with a hamstring. He was late in the game after sprinting to try to save a goal. Kieran Trippier should be fine.

The news about Emil Krafth has been devastating. The right-back suffered an anterior cruciate ligament injury at Tranmere last week. Emil released an impassioned statement after the results of a scan confirmed the worst possible news.

Howe was asked about the 28-year-old and confirmed the layoff would be very long saying:

“It’s an ACL injury. He hasn’t had surgery yet, so it’s hard to give an exact date, but it will take six to nine months. A long period of stoppage which is a blow for us.

Krafth received his news the day his international teammate Alexander Isak officially joined the club. Emil and Alex were seen in various photos and videos greeting each other over the past week. Isak was ineligible against Wolves due to a delayed work permit.

It sounds ridiculous but the situation around Isak is still unresolved. Howe provided the following update revealing that as of this morning, Isak remains ineligible:

” I still do not know. I hope so desperately – it would be great to see him involved.

“We are in other people’s hands, so hopefully it will be done before the game. The cutoff is 75 minutes before kick-off, so it could go all the way to the wire.

“We had little training with him between games, but what he did, he did very well.

“He looks bright, lively and has shown us little flashes as the sessions have been quite light. We are certainly excited about him.