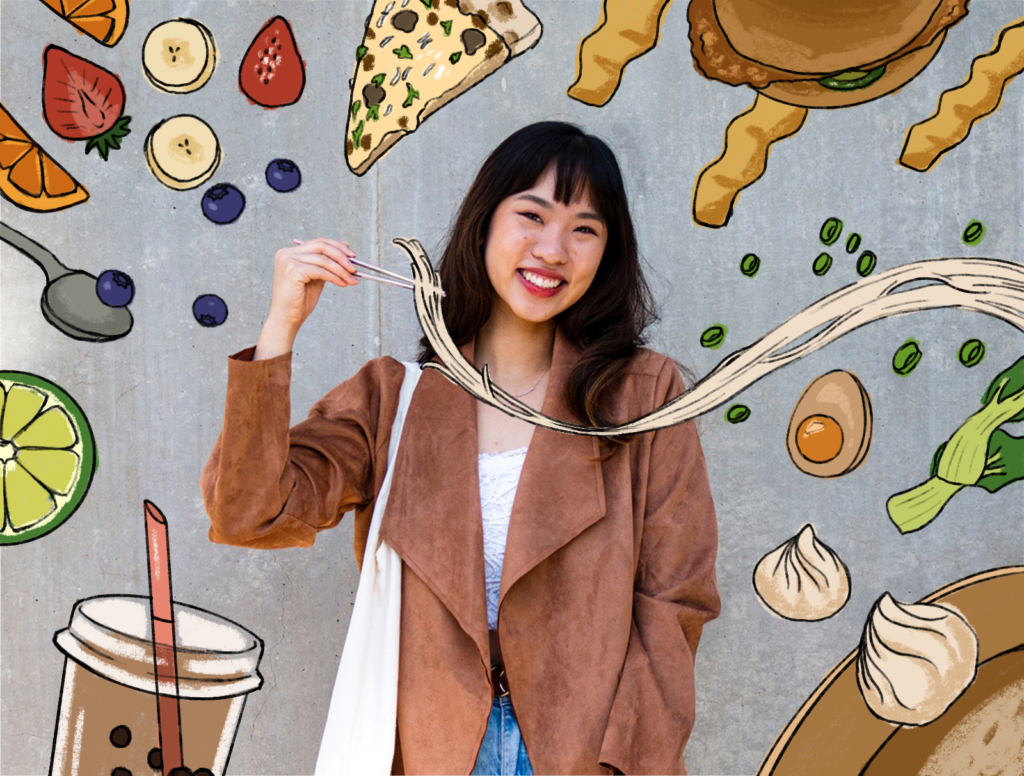 The third-year communications student hosts a instagram page where she posts and reviews dishes from various restaurants she visits, ranging from Los Angeles to Taiwan. Wang said she created the account in 2017 to share photos of her meals and engage with others. While she renders the photos neat, the captions are informal, she said.

“Before I started this food blog, I was really a creature of habit,” Wang said. “I was going to the same places and getting the same thing and never stepping out of my comfort zone. Now, if I try something new and don’t like it, that’s okay. I can post about it and talk about it and stimulate conversation.

Wang said her appreciation for different specialties came from her family, who immigrated to America from Taiwan before she was born. When she visits Taiwan, she says she takes pictures of her meals so she doesn’t forget the meal or the memories. After initially posting the photos for fun on her account, she said she enjoyed it and thought it might be something she could keep doing.

Since she manages her account casually, Wang said the captions and high fives are her honest opinions and have no structure. Wang also doesn’t want her followers to take the account very seriously, she said. Although Instagram provides her with a platform to do so, she said she challenges herself not to feel the pressure to be a serious food influencer. She can take a point off a burger’s rating if she doesn’t like the color or give it a high rating because the restaurant is aesthetically pleasing, she said.

“The silliness of the narrative makes it lighter,” Wang said. “I don’t want to give (anyone) preconceptions that will make them think food is one way or another.”

Through her account, Wang said she enjoys showcasing cultural dishes and capturing the diversity of Los Angeles. When she finds herself in a specific location, she said she will try the cuisine that is the signature of that place, instead of defaulting to a chain restaurant or a personal favorite. She reviews different types of restaurants, from Mexican to Asian to European, she said. Wang’s story led her to expand her comfort zone, she said, and inspired her to try dishes she had been hesitant to eat in the past, such as pork blood pancakes.

After trying many restaurants and posting on her account, Wang said her perception of food has changed. Before creating the account, she said she always ordered the same items on menus because she knew they were safe options. She said she is now slowing down to enjoy and enjoy the dishes more and the effort that went into preparing them. Wang also said she pays more attention to sometimes-overlooked restaurant details — such as wait time, service and plating — and speaks with restaurant staff to get insight into the meal.

Along with expanding her palace, Wang said she found community through her account. She connected with other bloggers and interacts with restaurants by tagging them, and she said some would like, comment or repost her photos. At restaurants, Wang said she consults and debates with her peers for the ratings and her posts also connect her different groups of friends.

Inspired by Wang’s account, third-year political science and sociology student Jenny Yoo said she relaunched her own food account, which she launched in 2020 before going on hiatus. Yoo said Wang’s photos are professional and of high quality, and his captions are informative, honest and comedic due to Wang’s entertaining jokes in the captions. Yoo said she appreciates Wang’s account because many of Wang’s restaurants are in Westwood, which makes the account accessible to students.

As part of the process of reviewing Wang’s account, Yoo said Wang asked her how she would rate the meal and inquired about specific parts of the dish, including aspects of appearance and taste, instead of general questions. Brittney Hun, a third-year human biology and society student, said Wang and her friends also changed their grades based on their conversations.

“It’s fun because it makes you think more deeply, to think critically about what you’re eating or what you’re doing,” Hun said. “Instead of just consuming nutrients, you can think about it in its own art.”

[Related: UCLA student crochets for a cause by donating business profits to charities]

Wang said she hopes her account will encourage people to step out of their comfort zone by trying new dishes. As a student at UCLA, Wang said she wanted to remind her followers to take a break from studying, go out to eat instead of ordering, and have fun. She also wants to encourage others to start food blogs if they’re interested, she said.

In the future, Wang said she hopes to travel to Europe, the Middle East and Australia. She said she’s planning more coffee posts as she moves to Seattle this summer and will continue to post her meals as well. She also wants to feature more home cooking on her account so she can document her journey of learning to cook, she said.

“If I’m not having fun, then what’s the point of me doing it in the first place?” Wang said. “If it doesn’t bring me any more joy, then I don’t want to do it. … It’s about the experiences and memories you create with your friends.