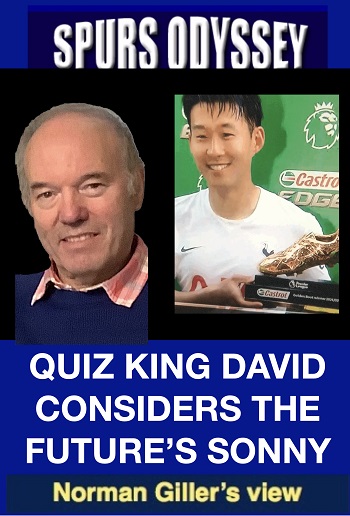 As we celebrate Tottenham in style for their Champions League spot next season, we should also raise a glass to our new Spurs Odyssey Quiz League champions. Arise ‘King David’ Matthews, a Spurs follower for over 60 years who hails from the Hotspur Hotspur territory of Cheshunt in Hertfordshire.

I leave it to the statistician friend of our guru Paul H. Smith Declan Mulcahy to describe the fantastic five-star, five-goal finish at Norwich yesterday HERE, while I focus on trying to console all of our quiz participants who finished in the wake of ‘King David’. (Let me say that Delia now has a recipe for stuffed canaries, cooked Sonny side of course).

Let me remind readers of the “simple” challenge I issued:

Select your idea of ​​the top ten overseas players in 1-2-3 order who have worn the Lilywhite jersey. The twist is that you are only allowed one player per country. Then name your top five UK-born players, also in 1-2-3 order. Each of your picks must have played for Spurs in Premier League games.

From the biting comments that accompanied your selections, none of you found it as easy as I jokingly suggested. It is this “one player per country” rule that has tripped up most of you.

So many of you fell at the Belgian barrier. You had the convincing choice of Jan Vertonghen, Toby Alderweireld and Mousa Dembele. My heart wanted Dembele, who had the best ball control since the Gazza days. But my head decided and I chose ‘SuperJan’ Vertonghen, Mr Coherence who brought composure and control to the heart of the Tottenham defence.

‘King David’ agreed with me, and he agreed with every one of my 10 overseas picks but not necessarily (as Eric used to say) in the correct order. He was also the only one to mirror my five UK picks. I was surprised how few of you considered Kyle Walker worthy of a spot. For me, he was Tottenham’s best right-back since Alf Ramsey in the 1950s.

Several competitors named Gazza and Gary Lineker in their ‘five’, forgetting that neither played for Spurs in the Premier League. And former golds Pat Jennings and Ossie Ardiles have found their way into some selections.

David Matthews, 68, a retired City stock trader born into a Spurs-loving family in Shoreditch, was the only entrant to score more than 50 points from the 60 available. Here’s how I rated the players:


2. Luka Modric (Croatia)
The master passer who controlled the midfield with an assurance that spread confidence.


3. Christian Eriksen (Denmark)
Our Danish prince was almost in the Modric class for passing and an expert in dead ball delivery.


4. Hugo Lloris (France)
A magnificent last line of defense that none other than Pat Jennings describes as “simply the best”.


5. Jan Vertonghen (Belgium)
One of three Belgians who have bolstered and brightened modern Spurs


6. Dimitar Berbatov (Bulgaria)
Like watching a replay of Alan Gilzean in the penalty area. No higher praise.


7. Robbie Keane (Republic of Ireland)
An ever-sharp Irish Fox in the box, who was dynamic with half a chance.


8. Rafael van der Vaart (Netherlands)
This ball performer would have been much higher on my list if not for those troublesome hamstrings.

I was torn between Erik Lamela and Moura for tenth place, but it was Amsterdam who tossed it out for Brazil’s little bombshell. Several slipped Cristian Romero, a sure star of the future but not quite ready for this elite company, and the gifted David Ginola didn’t make my list because he was too much of a show pony for my tastes ( and that of George Graham).

My top five UK-born players who represented Spurs in Premier League games were:


1.Harry Kane
“One of us”, his phenomenal goal production says it all.


2. Gareth Bale
The Welsh wizard and one of the most inventive strikers ever produced in the British Isles.


3. Ledley King
But for those dodgy knees I would have collected a century of English caps


4. Sheringham Teddy
Class from top to bottom, whether as a schemer or scorer.


5. Kyle Walker
Arguably the greatest of all English right-backs. What an athlete. Endurance and speed of a horse.

If there had been a tie, my three Tottenham Premier League managers were:

Many of you were on the heels of David Matthews and will spit blood reading my list. Finalists included former champions Graham Eyre, hat-trick David Guthrie, 2020 Queen Emily Hadjinicolaou and last year’s winner Peter Lawton.

And just to add to your misery, these were part of a group of players who came close to the title:-

“I write this from a very restful Yorkshire Dales where I have come for a brief break. A bit of background:

I am 68 and now live in Cheshunt with my wife and two children in their twenties. Where has this time gone?

I was born in Shoreditch in 1953 and attended Daneford Secondary Modern School in Bethnal Green. I worked in the City of London and Canary Wharf from the age of sixteen as a stock trader before taking early retirement after 40. This gave me time to indulge my penchant for the written word and led to a few publications relating to London history and detective fiction.

My very first visit to White Hart Lane was in October 1962 to watch a thrilling but ultimately disappointing 4-4 ​​draw with Arsenal after Spurs lost a three-goal lead. I attended the match with my grandfather and my father, both born and brought up in Tottenham.

Grandfather witnessed in the flesh Tottenham’s FA Cup victory in 1921, when Spurs legend Arthur Grimsdell lifted the Cup and Jimmy Dimmock scored a searing goal in the rain and mud at Stamford Bridge against the Wolves.

The East End family on my mother’s side were also Spurs fanatics, so there would never have been any chance that I wasn’t a Lilywhite.

As you well know, Billy Wright was the manager of Arsenal at the time of my first visit, and I remember watching the old West Stand from my high seat in the East Stand at the three Beverley Sisters seated near the directors dressed in bright red Arsenal.

It’s safe to say I was totally hooked after that game and was to be rewarded five years later when I saw my first FA Cup final at Wembley, with Spurs bringing the cocky young side Chelsea down.

Since then, like every other Spurs fan, I have rolled with the punches and attached myself to the roller coaster experience that inevitably comes with following this great club called Tottenham Hotspur.

Being a supporter for so long, I would find it nearly impossible to name a particular favorite Spurs player. Suddenly, I could reduce it to three:

As a schoolboy, it must be the great James Peter Greaves. In October 1965, I had a great view of that famous goal against Man Utd. It was the first time I had seen fans momentarily stunned in disbelieving silence at the genius they had just witnessed, followed by thunderous applause, even from spectators and Man U players.

As a young adult, it must be that elegant passmaster Glenn Hoddle, who seemed to embody everything a Spurs playmaker should be.

Well, as an old pensioner, it must be King Harry Kane. The entertainment and goals he has provided for Spurs fans over the past eight years has been phenomenal.

It has been a privilege to watch and support them, and winning this quiz contest is the icing on the cake. Thank you. COYS!’

I will now wrap and release this year’s prizes for the champion: a rare out-of-print book from my now very special Greavsie collection with autographs of the late, the great Jimmy Greaves, Dave Mackay and Steve Perryman, and, most important of all , a framed certificate announcing David as the 2022 SOQL Champion. Plus a signed copy of the book My 70 Years of Spurs AND a special bonus prize, the book Eighty At Eighty which I wrote in harness with Sir Geoff Hurst, still the only man to score a World Cup final treble (shortlisted for the Sunday Times Entertainment Sportsbook of the Year, I’ll let you know… awards ceremony at The Oval on Thursday).

And I enclose a signed copy of my One and Only Jimmy Greaves Biography, although I would much rather if you purchased it direct from me at www.normangillerbooks.com.

I make a donation for each book sold to the Tottenham Tribute Trust which quietly takes care of our old heroes, who have missed the sauce. Please support us, thank you.

Once again, I take this opportunity on behalf of all of us to thank Paul H. Smith for his efforts to make this website work. We should never take it for granted. It’s a labor of love and I want him to know that we appreciate his dedication and effort. There is a PayPal button at the top of this page where we can show our appreciation. I insert this paragraph without Paul’s permission. Let’s all support him.

So that’s it for another season. Don’t forget that my SOQL competition is purely fun and dwell on what Baron de Coubertin, founder of the modern Olympic Games, said: “The important thing is not to win but to participate…”

I will now take a summer break, focusing on selling my books! See you here next August for the Spurs Odyssey Quiz League Year No 9 replay, and, oh yes, the Champions League 🙂

I don’t know about you, but I already have a buzz about next season! As “King David” said to his subjects, the future is bright. The future is Sonny.

Back to top | Spurs Odyssey homepage