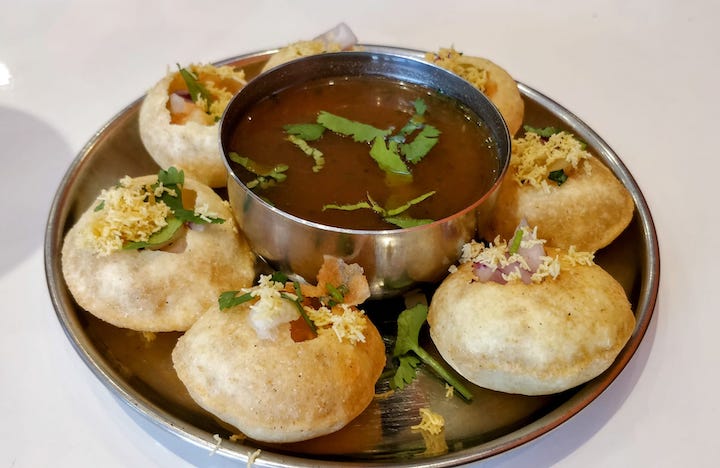 Review: The Plungington restaurant that beats the meat

In the latest Preston Blog series on restaurants for vegans, my daughter Ground Zero and I visited RK Dining in Plungington Road.

The premises are divided into two halves. The left side is for the booming take-out business and the right side has seating for customers who would prefer to eat in, so we found a table and sat down to look at the menu.

The first thing to note is the richness of the menu, especially since everything is vegetarian or vegan. Dishes are divided into groups such as Street Food, Indochinese, and Traditional Dishes.

Ground Zero ordered their favourite, Pani Puri at £4. Puri is a street snack that consists of a hollow, flimsy shell of dough, in this case the size and shape of a crushed ping pong ball. It is fried until crispy, then stuffed with a combination or variation of tamarind chutney, chaat masala, potatoes, onions, chili peppers and chickpeas. It is served with a bowl of cold, spicy water, so when you are ready to eat one, you dunk it in Pani water so that it fills up like a small pond.

There is a knack for eating Pani Puri. I’ll digress with a story of comparable mild peril, but I’ll come back to food four paragraphs down, so feel free to meet me there.

My daughter went to a Catholic elementary school and we had to make something called a Christingle. I had never heard of or seen it before, and that was before Google, so I asked one of the more knowledgeable moms.

She told me it’s an orange stuck with four toothpicks with candies skewered on them around the middle. There is also a candle on top.

I didn’t have any sweets or toothpicks, but I had a box of Cadbury Heroes and skewers, so I improvised, planted a birthday candle in it and sent it off to school.

A few weeks later it was returned to me at a Christingle service. The teacher put it in my hand with a look of weary disappointment and lit the candle, which started dripping hot wax on my hand. Luckily, I didn’t get burned because the moldy, rotting orange innards and exteriors had already covered my hand and arm with a stinky hazmat glove. One hour, I had to sit like that.

Read more: Vegans won’t be disappointed with this pizzeria in Penwortham

If you leave a Pani Puri too long after submersion, it will turn into an Armageddon of porridge and juice dripping from your elbow that can only be matched by an hour with a rotten orange. Your chickpeas will fall into your Pani water which will immediately go for your eyes and really give you something to cry about. Once you’ve dunked it, don’t hesitate or all will be lost.

Not ordering them is not an option – the sweet, sour, salty and spicy flavors combined with the different textures and temperatures are too good. Just… roll up your sleeves and pay attention.

On the other hand, if you’re eating with a chatterbox, you’ll have a decent interval of blessed silence because the only way to eat them without disaster is to put it all in your mouth all at once and figure out how to chew it afterwards.

I had a less menacing Thali, which consisted of two curries of my choice, starter, rice, three rotis and £7 Gujarati Dahl. We also ordered a portion of masala chips to share.

For my starter, I opted for a cilantro petish, which is a round ball of potato and cilantro, rolled in flour and fried. It was tasty but heavy so if you’re not a big eater you might be better off opting for something like a spring roll.

For main course I had eggplant and chickpea curry, Ringan Aloo and Gobi Manchurian (at an additional £1), which is an Indochinese dish of dumplings formed from spiced carrots, cabbage and cauliflower, fried and served in a soy sauce. sauce. I visit RK Dining whenever I’m in the area and have tried most of the curries. My two favorites are the Chilli Paneer, which is cheese cubes in a hot sauce, and the Gobi Manchurian.

If you’re feeding an inveterate meat eater who turns into a toddler when faced with a vegetable but loves spicy food, this is the one to sneak onto his plate. After allergy check. I gave it as take-out to a particularly sulky guy and he ate it all up because he had no idea it was all vegetables. That’s not to say it lacks flavor, just that the heavy hitters of soy sauce, garlic, chili, and vinegar turn the veggie flavors into sad little ghosts.

The Ringan Aloo didn’t have as much spiciness as the other curry, so I ate it before the Manchu got my tongue in the teeth. It was delicious, although I felt a little guilty eating it because this dish had a lot of oil in it. It’s not the best for calorie counters.

Review: Buy 2,500 calories for £3 at the new Preston Greggs Outlet

The rotis and rice pilaf were effortlessly perfect, and the small bowl of Gujarati Dahl was perfect for dipping into both. The masala chips were fries covered in a sweet and sour type sauce and could be addictive, although we ended up leaving some because we were both full. We actually asked for boxes to take home what we couldn’t eat and got another big meal out of it.

This brings me to the second wonderful thing about Plungington’s RK Dining. Every member of staff is polite, helpful, friendly and happy to give customers and diners advice or information about food. During my visit, the waiter came to the table four times to happily ask if we were ready to order, despite how frustrating that must have been. It took me much longer than usual because I was trying to find the best selection of dishes to give the most comprehensive review, and the choice was huge.

Review: The Fishergate Hill Cafe which is a winner winner chickpea diner

There was a couple at a table behind us who were clearly out of their comfort zone and had never eaten Indian food before. The waiter told them about the menu and recommended everything he thought would give them the best introduction, coming back for their comments between courses. Nothing was too much trouble and he was imperturbably happy. As I have been to RK Dining many times over the years I can say this is a constant from the staff which creates a consistently positive and welcoming atmosphere inside.

The third reason why RK Dining is in my top 10 places to eat in Preston is that everything can be taken away. Every time I go I restock my freezer with fabulous, authentic food that, despite being a moderately decent cook, I could never duplicate. They now also deliver, so anyone who wants an authentic treat, whether vegan, vegetarian, or carnivore, should give RK Dining a try.

(I ate the Cadbury Heroes, but they were still in their wrappers, so I couldn’t taste the moldy orange.)

BLOG: People and peppers are changing their names