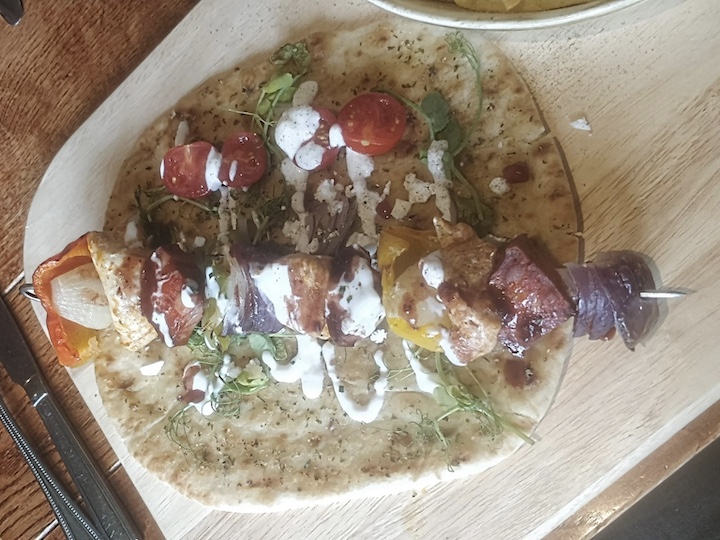 Review: The Penwortham restaurant with ugly bouquets of ashtrays

The second in Preston’s Blog series on best and worst rated restaurants is The Brown Hare, part of the Marston chain.

Located just off the Roundabout of Terror in Penwortham, it has garnered reviews that mention ‘stale bread’ and ‘bacon fit to drive nails into a wall’.

I kept that information to myself when I invited my 76-year-old mother Yvonne to join me, as I was still upset about the blueberry feud at Fino Tapas last week.

We arrived a few minutes after it opened for lunch so the parking lot was not busy. Walking to the main entrance, we noticed a revolting smell of stale tobacco, the sources of which we discovered were two magnificent clumps of cigarette butts packed in ashtrays on either side of the doors, and several scattered around the tables from the outdoor dining area.

Our first impression was so unpleasant that if we hadn’t been there to review the restaurant, we wouldn’t have gone inside. However, we went there to receive a warm welcome from the staff and an invitation to sit where we wanted. We didn’t take it literally as we would be back in the car then, so we chose a table for two near a bay window.

Upon closer inspection, the table top had a number of sticky, dried rings on it, which was the second off-putting item before we even ordered food. However, a member of staff apologized and cleaned it well when we brought it to his attention.

We asked about an offer advertising 30% off main courses and were told it applied to all main courses on the menu, which made the prices quite reasonable. I chose the homemade chicken and chorizo ​​kebab, which came with a baked garlic flatbread, a salad of crumbled feta and pomegranate seeds, honey, sauce fruity chili and seasoned fries, and Yvonne opted for goat cheese lasagna with butternut squash, roasted peppers, spinach and goat cheese, side salad, garlic ciabatta.

Mains came quickly, which was good for diners on a lunch break, but also indicated that there was probably a busy microwave in the kitchen.

Yvonne’s meal looked uninteresting and the salad was dressed only in her own mortification. We asked for dressing and the kitchen sent over a small bowl of plain olive oil, which we were told was the usual dressing for salads. We were then brought a kind of creamy dressing, which was much better.

Although the lasagna could have spent a few more minutes under the broiler, it was much better than it looked. The ratio of goat cheese to other ingredients had managed to find the safe little sliver of territory between “there’s no goat cheese here” and “a goat stuck its manky hoof in my mouth because I don’t throw the contents of this bag down his neck fast enough, and now I can taste his soul”.

The fries that came with my kebab were hot and crispy, and the chicken on the kebab was well cooked without being dried out. With chunks of chorizo ​​going well with the crunchy peppers and onions, this part of the meal was a hit.

The waiter asked us if we were ok, which we were at the time – because I hadn’t had a good look yet at the garlicky flatbread, the crumbled feta and pomegranate seed salad, the honey and fruity chilli sauce under the kebab.

The salad tasted like someone wiped their feet on the flatbread after a walk in the park. There were a few tendrils of wilted, browning green stuff, a squirt of white salad dressing, two cherry tomatoes, and a handful of pomegranate seeds. It made me wonder if the unhappy, floppy bread product was flattened by hand or simply by the crushing embarrassment of being severely underdressed in public after the salad was floated on it.

No honey, no fruity chili sauce, and how the chef managed to crumble such a small pebble of feta without a Large Hadron Collider is anyone’s guess.

Yvonne finished with a coffee and I ordered a tiramisu espresso martini dessert for 6. It came with a jug full of cream, and although it was a ‘bought’ item it had a great flavor and consistency.

After questioning the receipt, we were told that we should have asked the waiter which dishes were included in the 30% discount offer. We said we had, and were told this applied to kebabs and all other main courses. When she returned what was overcharged she commented that we should also have informed her when we asked for the bill that we wanted 30% off.

Every restaurant makes mistakes, and it was just a small one that could have easily been corrected by checking with the waiter who took our order instead of blaming a customer for not micromanaging the entire ordering system. Our inability to empty the ashtrays that still stank at the door on our way out went unnoticed.

In all fairness, the Brown Hare has a 5-star food hygiene rating, which isn’t easy to achieve. Thus, although very unpleasant, the sticky table and overflowing ashtrays may be due to staff absences or other isolated and unforeseen reasons.

However, the kitchen’s disinterest in what they send, poor microwave food, staff’s lack of knowledge of the restaurant’s own offerings and the ordering process indicate that there are ongoing failures to blame. for the number of consistent bad reviews.

The positives were the cheerful and helpful waiter, the speed at which the order left the kitchen, some moderately pleasant tasting dishes, and the inoffensive music.

This Penwortham chain restaurant is within a mile of several excellent cafes and independent restaurants with always knowledgeable staff and lively atmospheres such as Pane and Vino in Priory Lane, where diners can get homemade lasagna using the best ingredients for £6, a side salad for £2.50 and a whole 12 inch fresh garlic bread for £4.20.

It’s 5p cheaper than pre-discount prices at Brown Hare so I’ll spend my money there.

Does the smell of overflowing ashtrays make you hungry? Don’t waste time letting us know in the comments, see you at the GP.