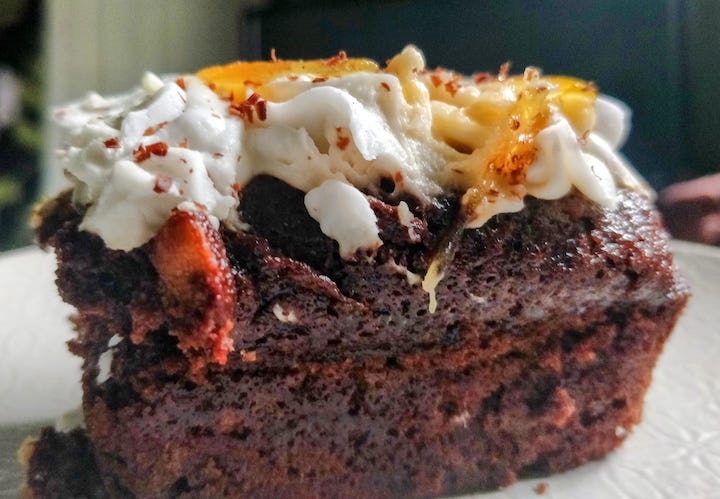 There’s a unicorn on Fishergate Hill! Not the flashy guy who poops rainbows, obviously. I mean unicorn in cool urban slang, which translates to “something so rare and perfect it’s almost mythical”.

At least that’s what I thought it meant, but when I checked the urban dictionary it was much more specific and now I know things I can’t ignore. To clarify: there may be a unicorn on Fishergate Hill, but it’s definitely not in Origin Juice and Brew Bar, which has a 5-star rating for food and hygiene.

I tricked my eldest into joining me in my latest review in Blog Preston’s Best Vegan Restaurants series. We are both meat eaters so I have withheld this information until we have returned greetings from the friendly staff which in England is like signing a contract in blood agreeing to stay until whether what you order is served, or one of you is dead.

The reason I review vegan food is that like many others, I would like to eat less meat and dairy, but I can’t forget that vegan food is just a topping too confident that I can hide under my cutlery after I’ve eaten the fun stuff.

The mythical ‘rare and beautiful thing’ I found is a friendly, family run, cafe that serves amazing all-home-cooked vegan food at prices no higher than other restaurants that serve pre-made junk food, transformed and bland – and is only a few hundred yards from the West Cliff entrance to Preston’s beautiful Avenham Park and its disappointing cafe.

Read more: Review: The Preston Park cafe that’s a thorn among the roses

An oat milk mocha was served in a large mug with a glass of water on the side which was a nice touch and once I got over the idea of ​​someone handling outraged oats with tiny udders, I found there was very little difference to the taste of regular cow’s milk mocha.

Our meals soon followed and everything was carefully prepared to look appealing.

The first thing we tried was a large bowl of broccoli and cashew soup with a homemade bun, for £3.50.

I wasn’t expecting much, as I firmly believe that any soup containing broccoli should contain at least 50% cheddar, but it was incredibly spectacular with no trace of blandness. This theme continued throughout everything we ordered.

We had a big bowl of creamy porridge with almond butter and oat milk, topped with peanut butter, chocolate sauce and strawberries for £3.20.

We also ordered a hearty coronation chickpea focaccia with arugula for £3.50, and a pastry topped with pesto, mushrooms and olives which my companion assured me was wonderful. We’ll have to take their word for it, because to me mushrooms are just lazy slugs.

We ate the soup and porridge but asked for the focaccia and the pastry to take away as we couldn’t handle anything more. We also added a box of cakes to our order at £6.95 for four. Two chocolate and caramel, one coffee and nuts, and one strawberry and vanilla. They were rich without being overly sweet or heavy and the different flavors were easily identifiable.

There are only so many words that can be used to rave about fantastic food, and I’m aware that if I use too many at once, I might leave the sunny realms of the “ecstatic critic”. and enter the dark forests of “fetch the pipe”. , she’s standing in front of the cafe again in pitch blackness, sniffing the mailbox’, so I’ll rather summarize by offering the highest accolade that can be bestowed upon purveyors of vegan meals by a greedy carnivore.

Read more: Review: Vegans won’t be disappointed with this pizzeria in Penwortham

It didn’t taste good. There was no vague awareness of something missing that even good vegan food can elicit in a non-vegan. It couldn’t be improved by the addition of meat, cheese, eggs or butter, and the only reason I couldn’t order everything that was served to us again is that there is so much other dishes on the menu that I’m excited to try.

Vegans, vegetarians, pescatarians, carnivores and everyone else in Preston: you have to visit this amazing little place. But please don’t make a unicorn in it, it will ruin things for everyone.

Have you ever made a unicorn in a cafe? Please don’t tell us about it in the comments, it’s a family blog.

Under-23 preview: Blackburn Rovers (A) – Blog