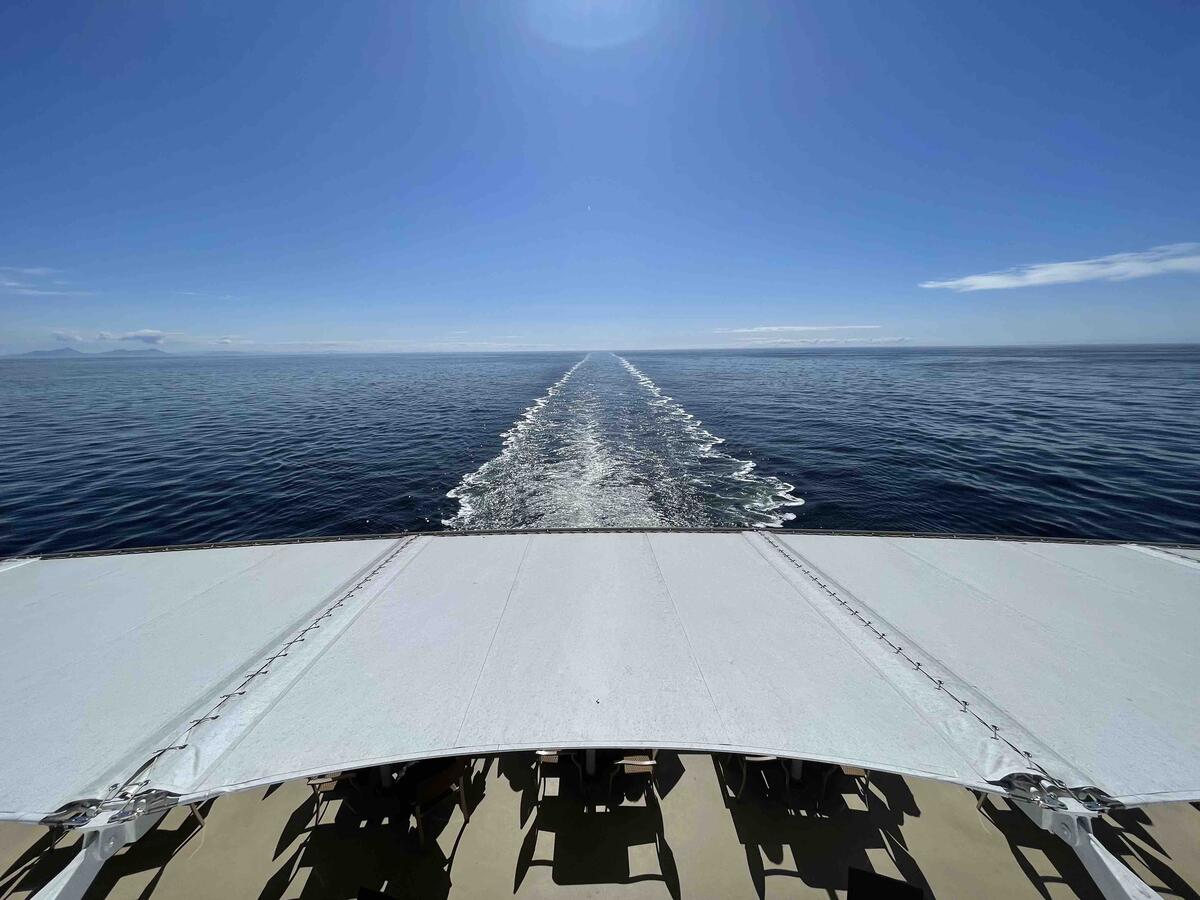 Hello from Radiance of the Seas! This is the second day of our 7 night sail to Alaska and today was a day at sea.

We were lucky with good weather today for our day at sea! It was 60 degrees and sunny all day without a cloud in the sky. The sea was so calm both days. I can barely feel the boat moving.

Sydney and I slept through our jet lag this morning thanks to the darkness of our inside cabin. I normally sleep with white noise, but the ship was so quiet I didn’t even need it. We woke up just in time to have breakfast in the main dining room, open until 9:30.

I started with a Latitudes latte while Sydney waited to be seated. I function poorly without my coffee, so this was a delicious way to start my day and use up one of my drink vouchers.

We were seated with a really lovely couple from the UK who were on their very first cruise! I don’t usually like to sit with strangers, but we really enjoyed our relaxing breakfast with new friends. We all started with yogurt parfaits, then I ordered the breakfast burrito while Sydney had the power bowl.

As we left breakfast, the atrium was filled with people taking a group Zumba class. I haven’t seen so many people in a training course on a cruise in a long time! Everyone looked like they were having fun with the music and the dance moves. 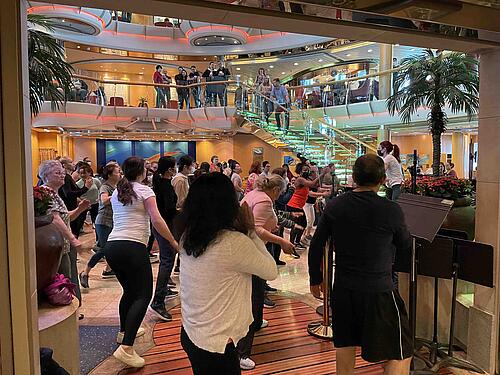 We bundled up and started walking along the upper deck. Sydney and I love walks so this was perfect after our breakfast. 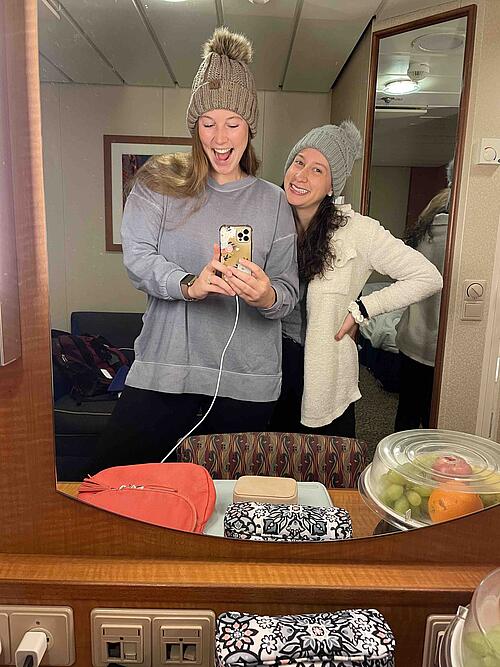 The sea was perfectly calm with water glistening beautifully in the sun. As we turned the corner, we even saw whales and dolphins in the distance. Nature here in Alaska is so untouched that it truly takes your breath away. 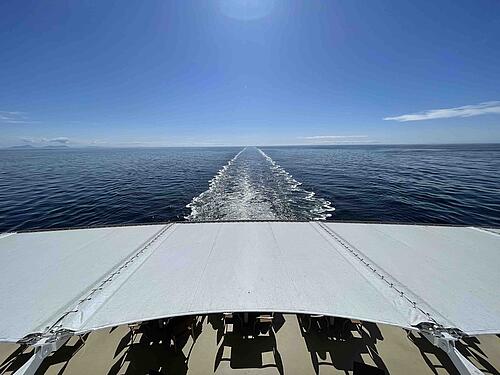 Sydney and I couldn’t forget how beautiful the weather was. It was really nice to climb up to the upper deck a bit and soak up the sun. The forecast for the next few days is cloudy and rainy.

Apparently there is a 100% chance of rain in the next few days. The statistician in me questions that kind of certainty, so hopefully we’ll have better weather than expected. 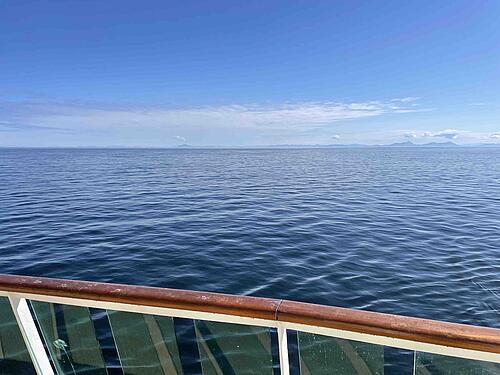 I couldn’t believe the number of people walking and exercising. This is probably the most exercise I’ve seen on a cruise ship. Maybe it was just the weather, but we saw tons of active people. Between everyone doing Zumba earlier and lots of people doing their own workouts on the upper deck, the ship seems to be full of active cruisers. The gym also looked very busy.

This is a far cry from my spring break cruise on Mariner of the Seas the other week where the main activities were drinking, sunbathing and eating.

After roaming the upper deck for about an hour, Sydney and I headed to the Schooner Bar. There was a meet and greet for solo travelers at 12:00 p.m. and Alaska Trivia starting at 12:15 p.m. We couldn’t quite identify if there were any solo traveler meetings, so we opted to wait for the trivia to begin.

The quiz was Alaska-themed, but both Sydney and I warned each other that we weren’t good at trivia or knowing fun facts. To our surprise, we got 7.5/15 questions! Nothing to write home about, but better than we expected.

I didn’t imagine we would be able to sit on the upper deck on this cruise, but the weather was too beautiful not to enjoy the pool deck today. 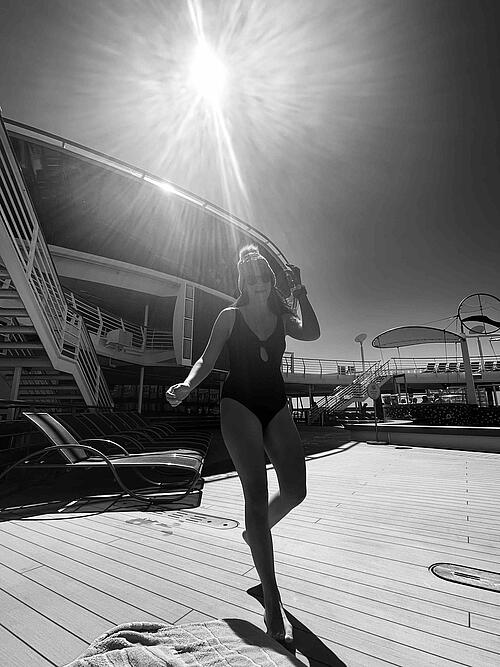 We bounced between the hot tub and the lounge chairs a couple of times. We also indulged in a cocktail party by the pool. There weren’t many people on the pool deck, as I think people assume it’s cooler outside than it really is. The Solarium was much busier. The pool water was actually quite comfortable; we even saw a few people there while walking earlier.

Since we had a reservation for Samba Grill at 6:00 p.m., we returned to our cabin to freshen up. We also treated ourselves to some downtime with face masks before getting ready for dinner.

If you’re like us and like to be pampered but don’t want to pay for the spa, consider bringing a few spa-like treatments on board. We brought 2 types of face masks to enjoy each night and I also packed some nail polish. We also asked our housekeeper for bathrobes to help us really bring the spa to our little inside cabin.

Sydney and I made a reservation for 6:00 p.m. to dine at the specialty restaurant, Samba Grill. I have sailed extensively with Royal Caribbean and had not even heard of this specialty option. Since I have a BOGO voucher to use on day 1 or 2 for specialty meals, we thought it would be fun to try something new.

I was blown away by the experience!

We were greeted by waiters from Brazil when we entered the restaurant. Sydney and I actually traveled to Brazil during our semester at sea, so we were excited to talk about the cities we visited and ask the servers about their hometowns.

Our server explained every part of the meal, which would start with a trip to the appetizer bar. This included goat cheese and pineapple salad, Canja de galinha (chicken soup) and assorted meats and cheeses. 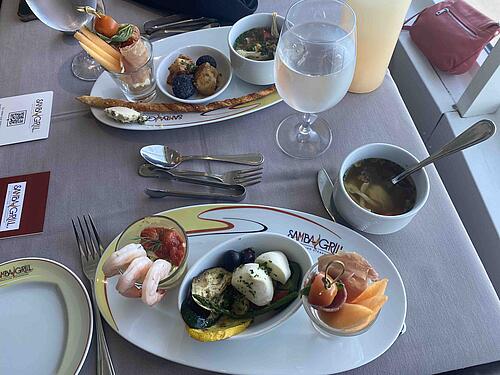 The next course was a hot bread basket which had 3 different options. I have very fond memories of the Brazilian Pau de Quejio, or small cheese bread balls. We also enjoyed a warm, flaky empanada with cheese inside. It melted in your mouth as the cheese oozed out of the dough. There was also garlic bread in the basket, which was crispy and delicious.

Not to be dramatic, but the sky opened up when the bread basket was delivered. 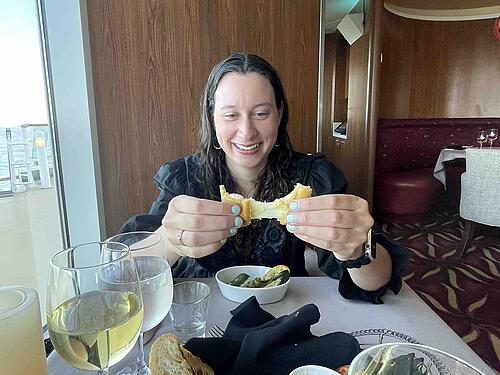 Then we were served feijoada (pronounced like “fish – wader”), which reminded me of a burrito bowl. The feijoada was a mixture of rice, beans, pork, breadcrumbs, green cabbage and oranges. Our server explained that Brazilians eat feijoada at least once a week, so this was a must.

We were also served fried bananas, polenta and yuca fries. We loved the bananas and the feijoada! 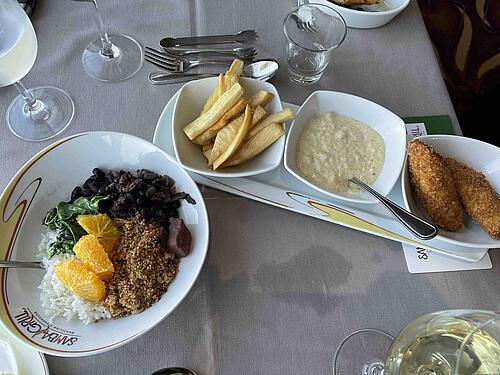 The main event was next – THE MEATS! Served by a gaucho sporting a cowboy hat, we were given tongs to grab freshly cut meats as he circled the restaurant delivering the meats.

We started with chicken wrapped in bacon followed by sausages. The chicken was amazing. Then we had a garlic marinated steak, which was so tender and flavorful. Then we were served pork and lamb in a parmesan crust. These weren’t our favorites as Sydney said the lamb was fatty and my pork was a bit dry.

The last served was a filet mignon, which was a showstopper. 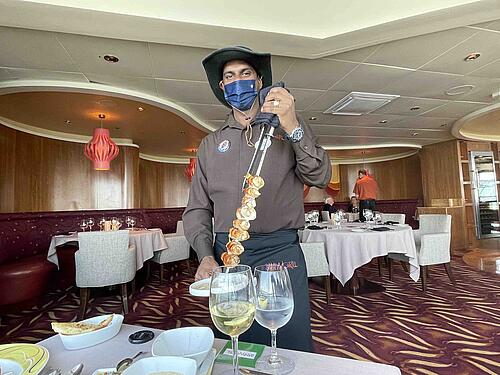 A few times we had to reset our green card to red so we could take a break and make room for more food! Everything was really good but our stomachs needed a break from time to time. 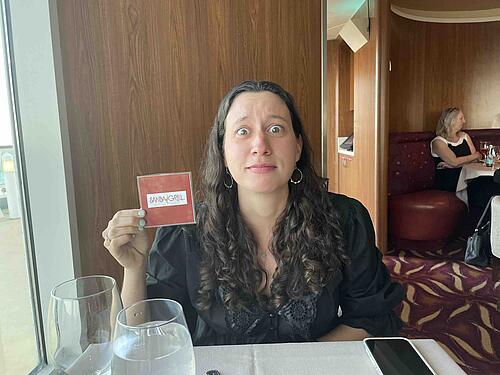 We were also lucky enough to start spotting whales during our dinner! The seas have been so calm that it is easy to spot any movement in the ocean. Sydney ran outside several times to take pictures, though they all look like splashes in the distance.

At one point there were 4 beaks that we could see at the same time on the horizon. The whales were breaching and putting on quite the show for us. 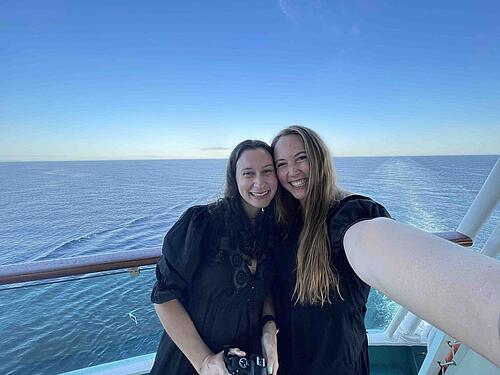 It’s so funny when someone sees a whale or a dolphin because everyone gets up and heads for the windows at the same time. It’s a unifying moment on board where wildlife is spotted! 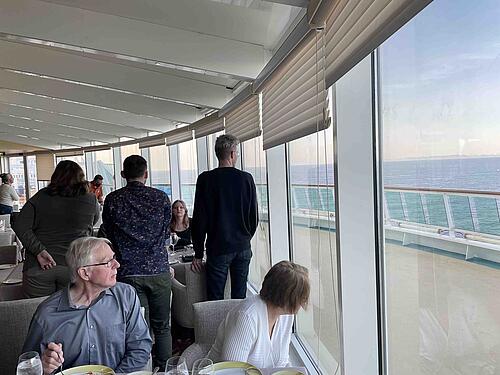 Back at our table and after the whales swam away, we were served cinnamon spiced pineapple. The pineapple was warm and sweet, a perfect comfort food that hit the mark. It was Sydney’s favorite part of the meal. 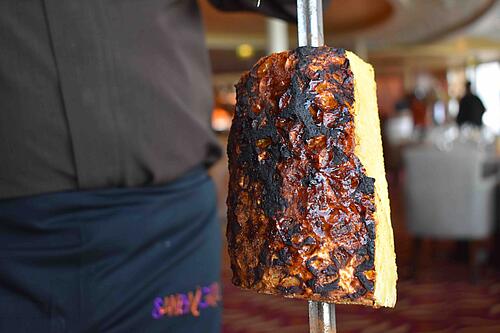 As if we needed more food, we ended the meal with a sampling of desserts, which included a thick, domed chocolate cake, a passion fruit flavored parfait called maracuja mousse, and a rum custard. 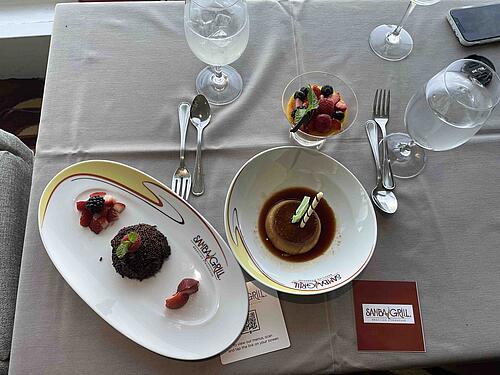 The mousse was our absolute favorite!

The whole dining experience took about 2.5 hours between eating, talking with the servers, and watching the whales. Apparently it was our waiter’s second day on the ship! He said he had never worked on a cruise ship and we told him he had done a great job. Alexander, who is from Brazil, took the time to explain everything in detail which made the experience more authentic.

Glad we took plenty of time to enjoy the meal and spot the wildlife, which you can’t predict! That’s the point of this cruise anyway – to enjoy the beauty of the Earth.

I’m taking the time to write tonight’s blog from the Solarium, as it’s still daylight at 10:00 p.m. The ocean is like a sheet of glass and I think our ship is moving at a snail’s pace as we head towards Ketchikan. 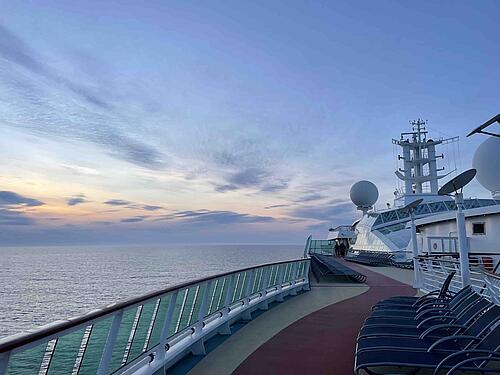 As I wrote earlier, we had no excursions planned for this cruise, but unfortunately the forecast looks bleak for walking around the city. We ended up booking a tour tomorrow for $69 called Ketchikan Trolley and Lumberjack show.

It seemed like a good option to visit the city even though it rains most of the day. It would be a shame to come all this way and feel like you can’t do or see anything because you can’t walk around.

We bought tickets at the shore excursion desk because the app was giving us an error. The crew member who helped us was from Brazil and we told him we had just had a great meal at Samba Grill.

He said he actually worked with Royal Caribbean’s head chef, as well as other Brazilian crew members, to develop the menu that’s served to ensure it’s authentic. He was happy to hear it was a great experience and I told him it was probably better than the steakhouse I tried while visiting Brazil!

To bed for us! Sydney was told the pilot from Alaska was arriving on the ship at 6 a.m., which will be 5 a.m. with the time change. Luckily for me, she decided it was too soon, so we should get a good night’s sleep.