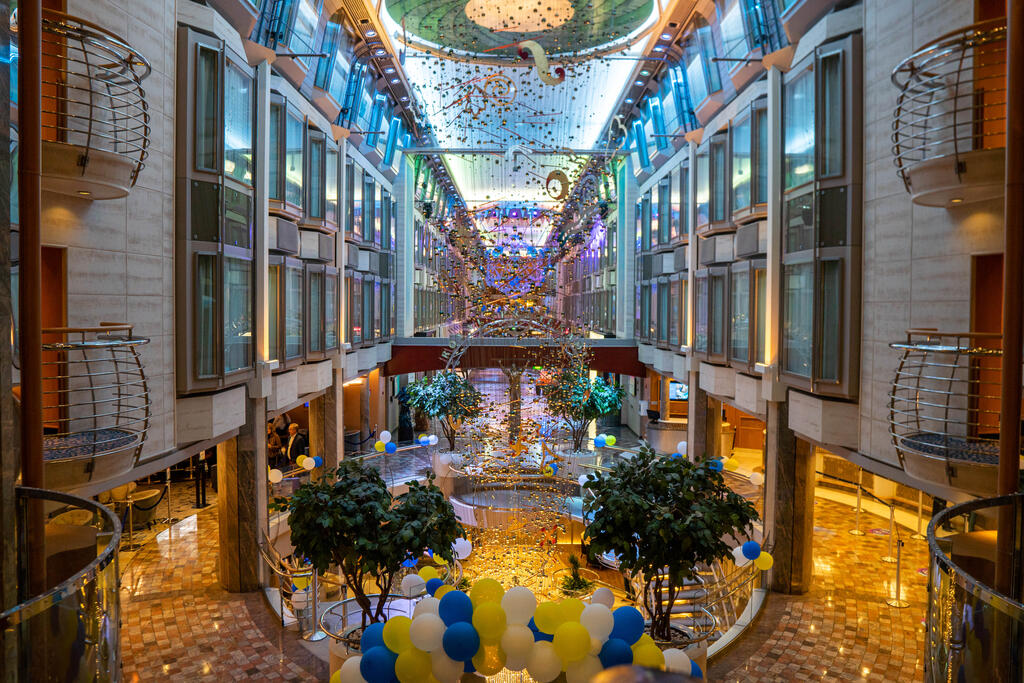 Today is day one of a two-night cruise from Los Angeles on Navigator of the Seas.

The Navigator of the Seas is a Voyager-class ship and is the first Royal Caribbean ship to leave Los Angeles in ten years. This two night cruise is media navigation, and Royal Caribbean invited me aboard to experience all that the new west coast cruises have to offer.

I was particularly excited about this cruise as I really enjoyed my cruise on Mariner of the Seas, which is also a Voyager class ship. I like the size, decoration and layout of the Voyager classroom. Additionally, Navigator of the Seas was boosted in 2019, so it has many of the same features and locations as the new Royal Caribbean ships. 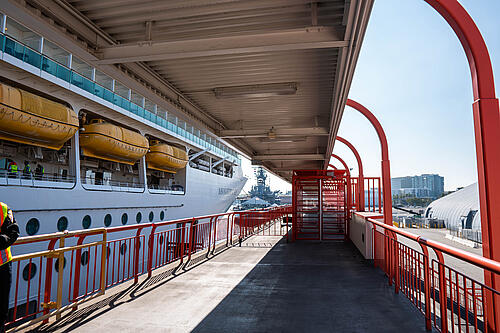 I arrived at the port around 11:30 am to embark on Navigator of the Seas. Our room was changed at the last minute and we were given an accessible balcony with an ocean view. The room is very spacious and after two cruises in an inside cabin I was really excited about the extra large balcony! 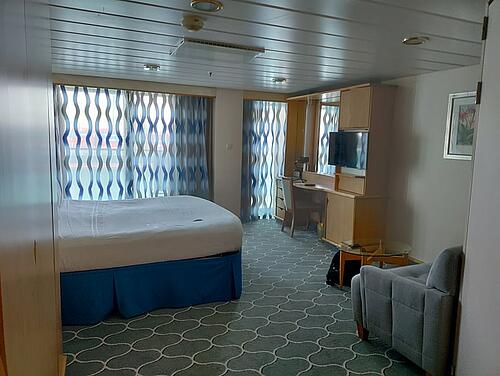 The first stop once I got on board was The Bamboo Room on the Royal Promenade. I think this could be my favorite indoor bar on any Royal Caribbean ship. Love the Polynesian and tiki style decor and vibe, and the drinks are really great too! I ordered the Banana Colada which never disappoints. 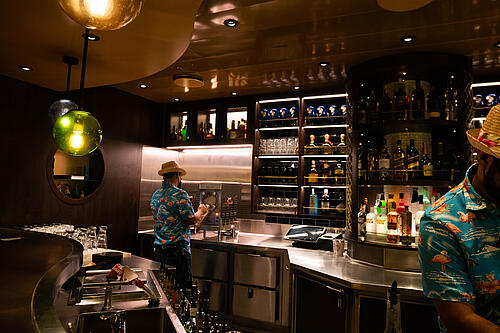 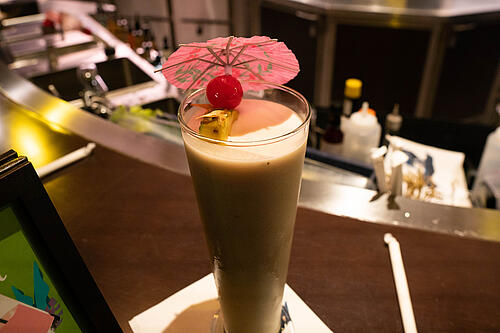 One of the main tasks of this cruise is to film a full tour of the Navigator of the Seas ship for the Royal Caribbean Blog YouTube Channel. This will be the fourth full tour of the ship that we have created, after Sea sailor, Odyssey of the seas, and Ovation of the seas. This afternoon was spent exploring the ship with my camera taking video clips of all the exciting places on board.

Being a media cruise, there have been a few special events. Many specialty restaurants offered customers food and drink samples, and the Windjammer offered an enhanced menu to celebrate the start of cruises in Los Angeles. I celebrated by tasting Chops’ red velvet cake (so good!) And tasting Indian food in the Windjammer for lunch. 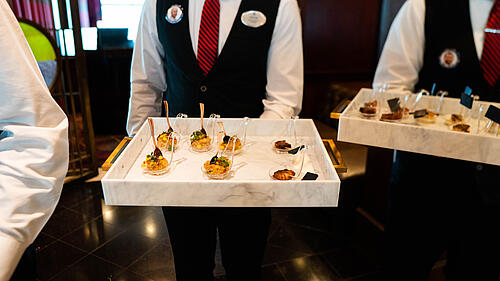 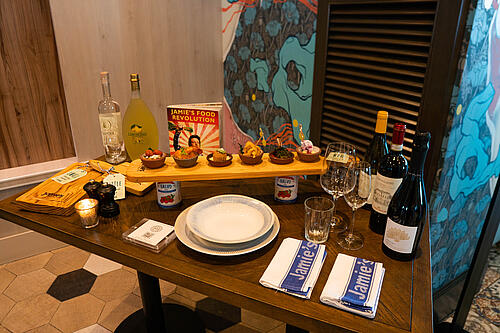 After lunch, I continued to explore the ship. The Navigator of the Seas amplification included the addition of Playmakers, The Bamboo Room, Waterslides, The Lime & Coconut, and more. The slides look extremely fun and even throw themselves over the side of the ship! I found the pool deck layout to be great too, with casitas, comfortable seating, and a tropical feel.

Sailaway was at 5 p.m. just as the sun was starting to set in Los Angeles. For sailaway, I headed to the top deck of The Lime & Coconut. I love how The Lime & Coconut has three decks, and the upper deck in particular has both comfortable seating and excellent views. 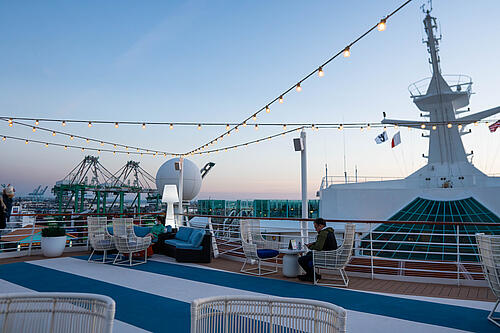 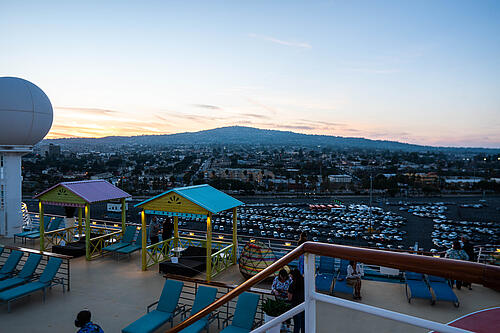 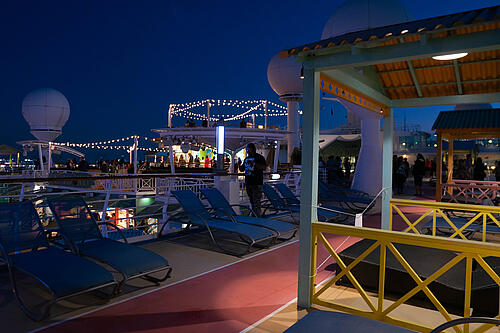 Soon we sailed past the Port of Los Angeles and into the open ocean. As night fell quite quickly after departure, we returned to our cabin to relax before an evening of activities on board.

First, we headed to the Viking Crown Lounge. Whether day or night, this space is one of the best places to relax with a view of any Voyager Class ship. 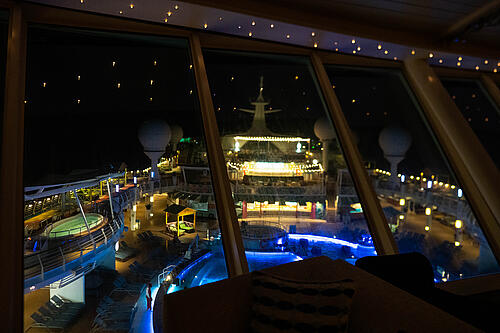 Next, dinner at Chops Grille. While I usually go for Italian or Teppanyaki, I decided to switch it up on this cruise. Our table enjoyed the crispy goat cheese salad, black pepper bacon, lobster, salmon, lime pie and cheesecake. It was delicious as usual! 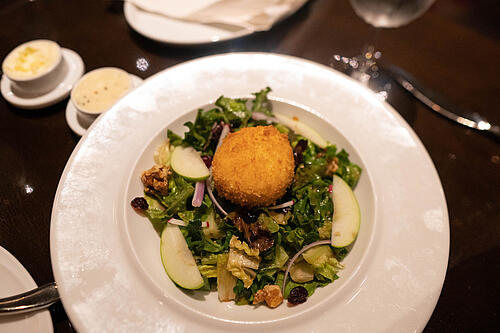 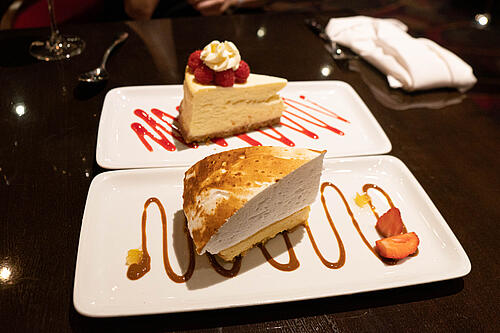 Dinner ended quite late and the rest of the evening was spent strolling around the ship, listening to Latin music in Boleros and relaxing on the balcony.

Overall it was a great first day on board and I am delighted to continue exploring Navigator of the Seas. Tomorrow we dock in Ensenada, Mexico. 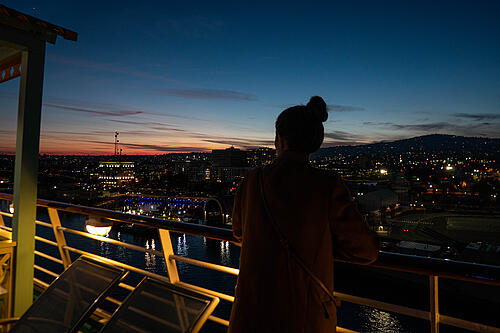 Make sure you go to the correct cruise terminal! We initially drove in the wrong area and ended up at the cruise terminal where Carnival and the Queen Mary dock. Fortunately it was only a ten minute drive away and seeing the Queen Mary was fascinating. However, definitely enter the exact address into Google Maps instead of just typing “Port of Los Angeles”. Whoops!

The DJ played some pretty awesome music during the trip.

I wish Navigator of the Seas had Teppanyaki!

The gym area on Navigator is much larger than on Mariner of the Seas. Playmakers also have more seating and space, including an owner’s box.

Right next to the Navigator of the Seas at the harbor is the USS Iowa. This is a retired battleship turned into a museum and seems like a great thing to do if you have extra time before or after the cruise.