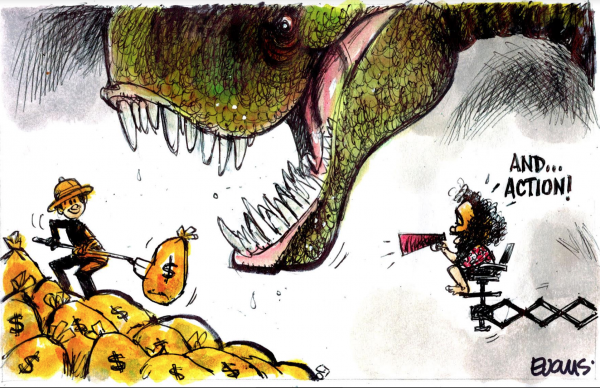 MEDIAWATCH: The spin-off wakes up completely on LOTR

One of the problems with Woke’s identity politics is that it manages to overshadow much bigger issues.

We have seen it in poverty and police profiling and we see it every week in Stuff, RNZ, TVNZ and most of all in government funded Spinoff.

When the Spinoffs aren’t using public funding to rank the best blocks of ice, they are constantly using the prism of identity politics to screw up any idea or oversight.

Take their coverage of the Steinlarger ad.

The spin-offs were very angry with the Steinlarger TV commercial because white people are made to look like heroes and grrrrrrrr identity, diversity, etc.

If we’re done with the identity politics remix, isn’t there a much bigger problem with that Steinlager TV commercial romanticizing nuclear-free protests?

Steinlager does nuclear-free protest TV commercials while their business owner owns some of the world’s largest uranium mines!

Isn’t that a little more hypocritical and a lot more damning than the identity politics goal that the Wokes are locked into?

Why we shouldn’t glorify the Lord of the Rings

… For the taxpayer-funded spinoff, the problem is, there aren’t enough trans elves and Maori hobbits to bring diversity to The Lord of the Rings!

Note that this is not how Peter Jackson and John Key gerrymandered the funding and passed a law to help a company shake up New Zealand workers, oh no you have the honest feeling that if LOTR had a scene of love between lesbian orcs and trans dwarfs, that would become a standing ovation at The Spinoff!

Real real-world workers getting fucked by a big corporation is the problem with the LOTR legacy, it’s not the lack of bisexual moms in transition as leads.

When you see everything through the lens of identity politics, class always disappears.

If you can’t contribute but want to help, feel free to share our blogs on social media.

Jagielka: “We were good as a unit” – Blog