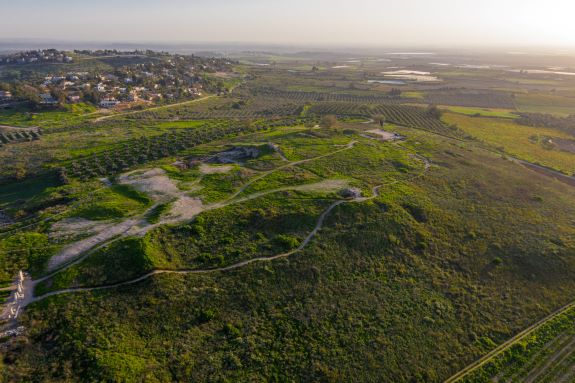 “Pharaoh king of Egypt went up and conquered Gezer and burned it with fire, and killed the Canaanite that lived in the city. He gave it as a wedding present to his daughter, Solomon’s wife, and Solomon then built Gezer (1 Kings 9:16)”

Today we visit Tel Gezer, an exciting biblical site that tourists rarely visit. From a distance, it appears to be a desolate non-descript hill, but those who choose to enter this historical marvel are immediately treated to an abundance of stunning biblical archaeology!

In Canaanite times, Gezer was a large city-state with its own king.

Gezer’s importance was largely due to its location at an important crossroads of trade routes.

The city’s infrastructure was quite advanced for its time, including a sophisticated water system.

When the Children of Israel entered the Holy Land after 40 years in the desert, they waged war against the 31 Canaanite city-states. The King of Gezer and his army fell in battle against Joshua, although they failed to capture the city (Joshua 10:33), which was designated a Levite city (Joshua 21:21). The city remained in Canaanite hands until the time of King Solomon.

Several generations later, Pharaoh (not the same as Exodus) conquered Gezer and destroyed the city by fire. When his daughter married King Solomon, Pharaoh gave Gezer to his new son-in-law as a wedding gift. Solomon rebuilt and fortified Gezer (and many other cities) as a regional capital.

Several hundred years later, during the Assyrian invasion of Tiglath-Pileser, Gezer was captured and destroyed.

During the Hellenistic Wars against the Jewish Maccabees (of Hanukkah fame circa 167-142 BCE), Gezer was rebuilt as a fortress and used by the Hellenists as one of their main military headquarters. That was until the Maccabees captured Gezer and finally won the 25 Years’ War, re-declaring Jewish independence in Israel (which lasted until the Romans captured the land in 63 BCE). time). Meanwhile, Gezer became an insignificant and ultimately abandoned small farming town.

Since the early 1900s, several major archaeological excavations have taken place, yielding important discoveries, including the “Calendar of Gezer”, the oldest (according to some historians) Hebrew inscriptions ever found!

Although few visit this site, the tourists I have taken there have really enjoyed seeing it! I highly recommend including it in your itinerary for your next visit!

(All Shutterstock photos rented by the author for commercial use; all others are free)

MEDIA: Seven Sharp vs. The Project