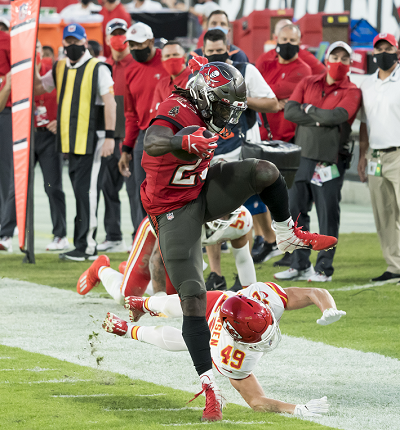 It’s the time of year when Joe can relax, open a Big Storm Beer and immerse yourself in the world of fantasy football to prepare for August.

And sometimes exercise leads Joe to learn more about our beloved Bucs.

Many fans and pundits like to wonder how much more the Bucs will check the ball and/or throw to running backs with Tom Brady on the roster.

The fantastic site 4for4.com dove into the numbers and produced the graph below that explains how often the Bucs throw at running backs. It’s obvious the needle hasn’t moved much since Brady’s arrival – and his influence within the offense has grown.

So what does all this mean? Well, for starters, it shows just how beastly the Bucs receiving/tight end body has been. Tampa Bay led the NFL in yards and passing attempts, and that ball was going to receivers/tight ends at a high rate, even in the face of injury.

Also, as 4for4.com detailed with data, it could mean that former Bucs running back Ronald Jones was so deficient in the passing game that the Bucs were held in that area and the pick. Third-round rookie Rachaad is poised to thrive.

Whatever all that means, no one can quite argue that Tom Brady loves throwing running backs more than Bucco Bruce Arians and Byron Leftwich.