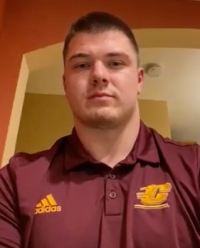 One of the main reasons the Bucs liked Central Michigan offensive lineman Luke Goedeke aside from the fact that he can block is that the second-round draft pick was a pissed off type. Ryan Jensen in college.

Joe heard from the vine that one of the goals for the Bucs this offseason is to develop a little more bite from their dawgs on offense. Goedeke fit this bill very well. But after a few Zoom calls with Goedeke, offensive line coach Joe Gilbert quickly noticed something.

Goedeke, Gilbert said, is a pretty sharp cookie for a rookie.

“Luke, obviously I think he has all the intangibles,” Gilbert said. “His retention and the mental part of it is really good. And to me, that’s probably the hardest thing for a student to come out. How fast can they pick up the system? Because the volume is so different [in the NFL].

“So far just from his retention, he seems to be pretty good.”

As a second-round pick the Bucs traded to acquire, you’d think Goedeke could be the lead dog to replace the retirees. suddenly thin Ali Marpet. No, no, no, said Gilbert. This position is wide open between Aaron Stinnie, Nick Leverett, Robert Hainsey and Goedeke.

“It’ll be fun to watch at camp,” Gilbert said of the competition. “What’s better than competition?

Nothing at all, coach.

Joe has a hunch that the winner of the starting left guard position is either Stinnie or Goedeke.

The Power of Presence | creed of jesus