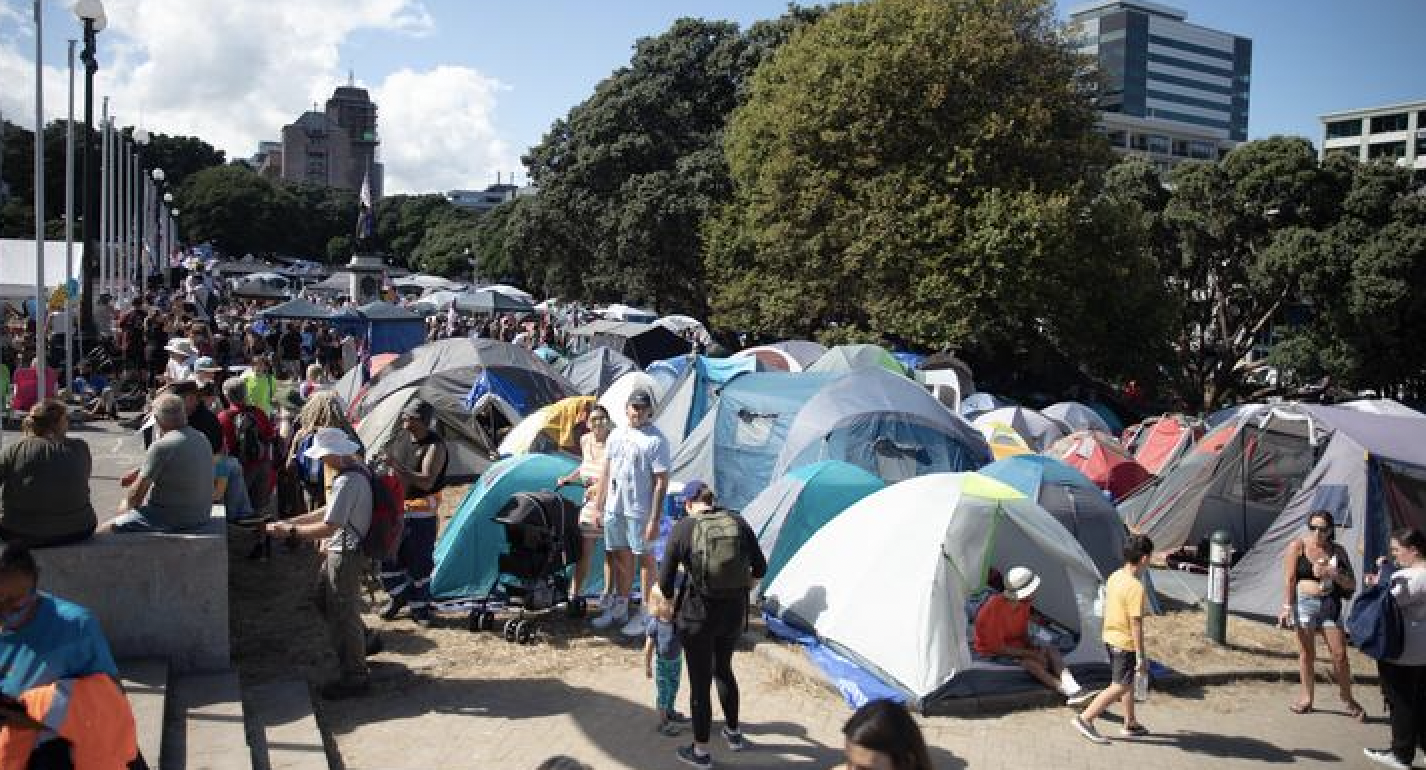 Much has been said about the growing debacle involving the occupation in and around the Parliament grounds in Wellington. I have already blogged a review in my previous Policy bytes Publish: Far-Right Rights, Responsibilities and Agendas.

Much has changed since then. Abuse and intimidation (including threats of violence) have increased for residents, local workers and bus drivers, parliamentary staff, journalists, mask wearers and others unfortunate enough to find themselves near. The far right has migrated to anti-vaccination activists like vultures to a carcass.

The occupation now extends further along Molesworth St and other nearby streets, as well as to Victoria University’s Pipitea campus (which has now been closed to students for security reasons).

Threats of injury and death against politicians, journalists and others continue with the added dimension of a call for a military coup. It is not an insurrection but there is no doubt that the far right, which to date has the greatest influence on the direction of the occupation and its tactics, would like this to be the result.

There has also been an exaggerated narrative suggesting that the “dispossessed” are leading the occupation. There are certainly many people in New Zealand living in dire circumstances due to both cruel government decisions and neglect. Stripped of secure employment and other basics, they have good reason to feel marginalized and disenfranchised (“declassified”, in other words).

However, while the ‘dispossessed’ are part of the occupiers, they are not the drivers and their involvement is overstated (certainly as far as leadership is concerned). That was definitely my experience going through the busy day one.

Also, the ‘dispossessed’ tend not to own Utilities, SUV’s and Motorhomes blocking Molesworth St, unless I’ve misunderstood what the word means. The presence of a millionaire’s partner doesn’t help this narrative either.

Voice of the Dispossessed (Millionaire’s Partner)!!!

There is more to say, but the situation is well described in two published articles. I don’t necessarily agree with all of their comments, but on the whole they are correct. The first is by Thing journalist Charlie Mitchell (February 18): Police inability to understand.

The second article is Writing political editor Jo Moir February 19): Behind the political maneuvers. Both articles are good reads.

What stands out is the failure of the police leadership (which does not reflect the basic police). Management was unprepared. Better preparation and a more strategic response earlier may well have made a huge difference. Initially, the convoy was described as a convoy of trucks. It clearly wasn’t (utes, SUVs and motorhomes instead).

But it was a clear indication of an intention to block roads, Molesworth St being both a major thoroughfare and running alongside Parliament. There were no plans to redirect these vehicles when the number was much smaller. They were simply left to block the street at will.

It was as if police leaders ignored what was already happening in Ottawa on their own television screens, including the involvement of the far right.

It also raises the question of what the security services were doing – the Government Communications Security Office and security intelligence services should have been well aware of the risk, including international connections from the United States, and advise the police accordingly.

I was amazed to learn that when the parliamentary security guards asked for the help of the police to remove the illegal tents on the ground when the numbers were very low, it was refused. No attempt was made to prevent the erection of tents, although this would have been increasingly difficult as the number increased. Then it got worse.

At least until about 3 p.m. this morning, the police leadership had, in fact, conceded defeat and given virtually free rein to the far-right-influenced leadership of the occupation. Worse than failing to protect the abused, intimidated and threatened public, the police leadership then downplayed the significance of this behavior although they now appear to have reversed their position.

The far right and those it influences were granted open access to the areas they had taken over. No wonder they feel emboldened and believe they beat the police. With some justification, they can consider that they had won and that the sky was their only limit.

It is extraordinary that a disunited and fractured far right can outsmart a police leadership that has a much larger disciplined and trained workforce.

The likes of far-right Kelvyn Alps foiled the police

I still vividly remember witnessing police brutality over 40 years ago in 1981. It was the same street blocked by wealthy vehicles today (Molesworth). The violence was against peaceful anti-Springbok marchers.

I was around 8and row at the front of the step where the assault occurred. Throughout the eight-week tour, the police moved heaven and earth, including violence, to protect this racist tour.

It is surely no exaggeration to expect that the police will now move heaven and earth (without violence) to protect the public from the risk of Covid infection and worse, as well as intimidation and threats of physical harm ( and worse)!

But intimidation and threats of violence (and worse) are not the greatest danger to the public We now find ourselves with a worsening public health risk amid the Covid-19 pandemic.

Its highly transmissible variant (Omicron) is out of control and spreading rapidly across New Zealand. It should soon invade our already overwhelmed public hospitals.

While Delta is more lethal (a higher probability of death for those infected), Omicron is potentially more devastating. Its transmissibility is so high that the previously successful elimination strategy (including containments) is rendered ineffective. We can only hope to mitigate rather than eliminate Omicron. Mitigation can take months.

We are already at an all-time high in hospitalizations. Hospitals will struggle to cope with Covid-19 patients alone. Many other patients in need of critical treatment, such as cancer and heart, will be missed or dangerously delayed. Worse still, the diagnosis could be too.

With its higher transmissibility and reliance on attenuation rather than elimination, it is possible that Omicron could cause more deaths than Delta.

So where is this occupation in the form of the extreme right? The last thing New Zealand needs are virus spreaders. Large crowds without public health measures, such as social distancing and masks, are potential virus spreaders.

This is even more true when many or most are unvaccinated and in a very crowded environment. It is the unvaccinated who are already putting disproportionate pressure on hospitals. This will get worse as Omicron continues to crack down.

This particular occupation (unlike any other occupation we have known) is a huge virus spreader that reaches far beyond its participants; to those they encounter or threaten during and after the event. This is expert advice from leading epidemiologists and other medical specialists.

When the pandemic first hit New Zealand in March 2020, the government declared a state of emergency. It was the right decision. Declaring a state of emergency is an essential part of a country’s response arrangements. It allows the authorities and persons concerned to exercise extraordinary powers intended to provide an effective and rapid response.

The far right and those it influences have created a huge illegal spreader of viruses. This justifies the state of emergency as much as the arrival of Covid-19 did almost two years ago.

Currently, the government is caught between a rock and a hard place because of the strong, sensible tradition of not being involved in police operational decisions. But these are exceptional circumstances.

A state of emergency based on the current level of intimidation and threats in Wellington cannot be justified. But it could be on the basis of the threat to public health. This would enhance the ability of the police and other authorities to protect first and foremost the health (not to mention the personal safety) of the public in and around Parliament and beyond.

Encouraging the police initiative this morning to block the occupation (including preventing access) and protect workers and others on the streets is a smart step in the right direction.

This must be followed by the recovery of other occupied or threatened premises such as the university and the courts. The gradual and well-planned removal of vehicles blocking the roads should follow.

Then there should be a firm (but non-violent) gradual strategic withdrawal of the tents from the field. This will take time but should be helped by previous activities. The threat to public health should be the main driver of this direction.

Prime Minister Jacinda Ardern’s government should not be blamed for this debacle, but it must show leadership to address it

If the current situation is allowed to continue unabated (or even if reduced), the likelihood of affecting the health and well-being of the innocent will increase exponentially (including otherwise preventable deaths). This must be quickly reversed.

Otherwise, not only will the far right have won (it has already won enough) and the police will have failed, but the government will also have failed.

The responsibility for this debacle should not be attributed to the government given these exceptional circumstances. But it’s the bet to the right that counts.

Ian Powell was executive director of the Association of Salaried Medical Specialists, the professional union representing senior doctors and dentists in New Zealand, for over 30 years until December 2019. He is now a health systems commentator , labor market and political living in the small river estuary community of Otaihanga (the place by the tide). First published on Political Bytes

The most popular cruise lines (and why)