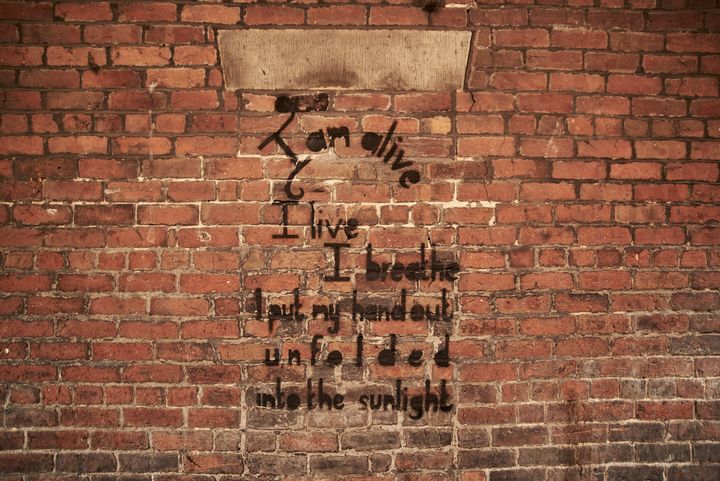 An anonymous artist has created a literary quote trail in the alleys of Preston.

The unauthorized graffiti artwork – installed without permission – forms a unique trail that crosses some of the city’s best-known and hidden alleys and walls.

All of the artwork was installed in walled-up windows – and the project was named “Broken Places”.

The first piece “Buy the Ticket, Take the Ride” at Old Cock Yard was intended as a stand-alone piece of art, but it elicited such a positive response from Preston audiences that nine more were created.

Other pieces were installed at places such as Surgeon’s Court, Bolton’s Court and Clayton’s Gate. A a map was produced showing the ten locations.

Kit Graff said: “I attended the Lancashire Photography Festival earlier this year. While helping Garry Cook put together some pieces for this project, I wandered through many of Preston’s back alleys and noticed that behind the facade of this bustling modern city hides a hidden layer of beauty and neglect.

“There is a wealth of exquisite architecture that over the years has been left without maintenance and ultimately forgotten.

“There is a sad permanence to a window that has been bricked up. The view from the window has been removed forever.

“With the windows bricked up, I am simply replacing this lost physical sight with a metaphorical artifact, namely a quote from literature, an author’s point of view.

“Not only are the quotes physically hidden in the alleys and alleys, while they come from novels by well-known authors and their works, they are not always their best-known phrases and therefore are themselves hidden. “

The installations have already made an impact, but the artist found their installation spooky.

Kit Graff added, “I must be Preston’s most anxious graffiti artist. I was always terrified of being arrested or people yelling at me, but I thought it was worth the risk to create something worthwhile. But I never had any problems.

“While I was working on the Tithebarn, a couple on their way to an Extinction Rebellion protest came and chatted and supported me so wonderfully it really helped me.

“When I set up the last piece on Surgeon’s Court a group of people walked by and one of them told me he had seen the piece at Bolton’s Court and loved it. He told me he was really happy to be able to meet the person behind them. It was an uplifting and joyful interaction.

“I always took a photo as soon as I finished a piece, in case it was immediately deleted or tampered with. It wasn’t until I got home that I looked at the photo and really saw the room for the first time.

“I was too immersed in the process when painting them. I would go back the next day and stand in front, noticing any little flaws and muttering darkly about wobbly or stained pieces. Sometimes I would put away a stray letter with a black Sharpie. No one else seems to notice these imperfections, but you see all the flaws in your own work.

Kit Graff also accepts that some of the unauthorized installations may be removed, as has happened before.

They said, “I have to accept that this can happen. Once you put on a piece of graffiti, you need to walk away from it knowing that it is no longer yours. The council could eliminate them all. They now have a map with each of them – maybe I shot myself in the foot there.

“I hope someone in their right mind decides it’s worth leaving them alone, at least, until time erodes them all.

“You could say that I was not allowed to display them and that it is vandalism – and you would be right. I never asked for permission – that’s not the point of graffiti.

“I don’t give my permission to have billboards in front of my eyeballs every day on the way to work, but they’re there anyway. At least my work offers a brief respite from the relentless onslaught of consumerism that we are all bombarded with on a daily basis.

Have you seen any graffiti? Let us know in the comments below.