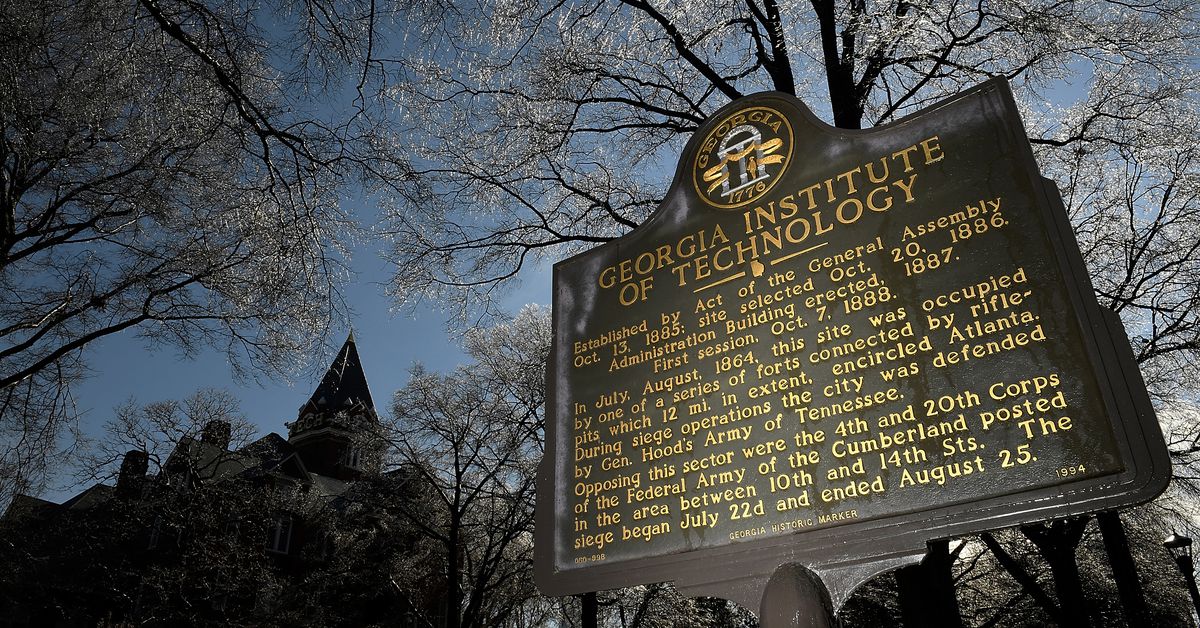 It’s that time of year again. The moment you know you still have a place to come home. If you haven’t been able to participate in other games this year, then this is the one you want to see. Alumni and undergraduates have fun and celebrate the good times they had at Georgia Tech …

This week we’re heading home to watch the Techmo Bowl and take on our rivals from VPISU. Virginia’s last school didn’t treat us well, so expect there to be pent-up frustration from players and fans ahead of the game.

For this week, we’re focusing more on GT traditions and discussing the campus in more detail than we did in previous weeks. Less focus on hotels or travel, more on just getting back to campus and the fun stuff for alumni.

How to travel: Getting to Atlanta

Technically (hah … Technically) I’d say we have visitors from Blacksburg, but it’s back to basics, so this article is more for Georgia Tech alumni. If you are coming from Blacksburg it will take you approximately 6.5 hours to drive straight down from I-77 to I-85 South. The plane will bring you to Richmond for a flight. Driving is probably the best option.

If you are a GT fan, you know where to go. It can be a struggle, most people don’t want to come back once you’re out. Eventually, Ma Tech will call you home and you will have to answer. Stay with family, friends, hotel, just try to stay close to campus and you can’t go wrong.

The more things change, the more they stay the same. There is a lot of new and old to see on the Tech campus. Honestly, I’m still surprised that they can continue to develop a place in the heart of downtown so quickly as time goes by. I’ll do my best to cover as many campuses as possible, but please excuse me if I don’t name your favorite building … there are a lot of them.

Since we’re here for a soccer game, the easiest building to find is Bobby Dodd Stadium. For those who don’t know, Bobby Dodd Stadium is the oldest NCAA stadium still in use today. Across from Bobby Dodd is the Brittain Dining Room which, prior to the opening of the new North Ave Apartments Dining Room, was the main dining room on the east side of campus.

If you follow the road to freshman hill (or The Hill) you will see the Andrew Carnegie Library attached to the Clough Undergraduate Learning Commons (CULC). The CULC building was one of Georgia Tech’s first attempts to establish sustainable energy on campus. The architecture of the Clough building is unique and its rooftop green spaces stand out from some of the older buildings that surround it, such as the Skiles classrooms opposite.

From the top of The Hill you can turn left and continue walking to see the Tech Tower atop the administration building where it has stood since September 1888. Opposite you will see the John Saylor Coon building which is currently used to house the school of psychology. For undergraduates, if you need a little extra pocket money, I think the school of psychology always pays for the participants in their experiments.

As you go around Ferst Drive you will come across the Aerospace Schools, highlighted by the Montgomery Knight and Paul Weber buildings. If you’re not sure, they should have rocket nozzles outside or in the halls of the building, making schools easy to identify.

You can then walk to the STAMPS building which is attached to the student center. if you leave the road towards the Tech Green, you will see the Campanile. Look for tennis balls in the campanile, these were left by students daring enough to climb into the well. The tennis balls indicate how far they went before they had to flee from the campus police.

This area of ​​the campus has more school buildings to see. They are eclectic and you can see the generations in which the buildings were constructed depending on the architecture of the building. There are the Architectural Buildings, the Van Leer School of Electrical Engineering, the Howie Physics Building, the College of Computer Science (or CoC for short), and the Klaus Building of Computer Science (or Super CoC for short). .

If you return to Ferst Drive and follow it around, you can see the Ford Environmental Science and Technology (FEST) buildings, which are relatively new to some of the more modern environmental science majors. The MRDC, MaRC, and Love Engineering buildings are the oldest engineering practice buildings. The ISYE buildings are also nearby.

The CRC which was built for the 1996 Atlanta Olympics is still standing and is an exercise area for all students. Behind the Burger Bowl you will find student accommodation on the west campus as well as the Couch building which houses the music school.

The pavilion and theater will greet you as you stroll through the entirety of Ferst Drive. There are a lot of buildings that I haven’t named, but I want to point out one more that is still standing. The Engineer’s Bookstore (which makes sure to submit their picks every week. Thanks guys) can be found if you’re willing to leave campus for 748 Marietta Street. I have always had my books cheaply there, so thank you again.

If you’re a longtime tech fan, you probably won’t learn anything new here, but we’ll go over the bigger ones anyway. We’ve covered the fight song and George P. Burdell in my previous posts, so these will be left out. This week, I’m mainly focusing on other reunion-related events.

Please note, due to copyright issues, I didn’t have much to do with the image. I have done my best but some are not entirely correct.

The event that not everyone might be aware of is The Freshman Cake Race. Traditionally held on the morning of the homecoming game, the Freshman Cake Race takes place before dawn (between 5 a.m. and 6 a.m.) and is a running race that in the past ran on a winding path through the baseball stadium. Russ Chandler at Bobby Dodd Stadium. All contestants are intended to be freshmen (students with 30 hours or less of academic credits). The race is split into 2 races for each gender group and the winner of each race will receive a cake and a kiss from Mr. or Mrs. Georgia Tech at the Coming Home Halftime Show. All participants will receive cupcakes.

The race has come under intense scrutiny recently and attempts have been made to make the race more organized to avoid interference from outside participants (some people like to throw things at runners). Unfortunately, because of this, some discussed the cancellation of the race. Hope they continue to host the Freshman Cake Race in the future, it is a unique and fun experience for the spectators to watch.

The Mini 500 is a tricycle race conducted the week you get home the day before the game. The race is run by teams of runners using tricycles provided by the Reck Club. Tricycles can be modified with just one support brace, as college students tend to weigh over 5 years, but are not otherwise modified. Riders will cycle around the Peter’s Parking Bridge for 15 laps (10 laps for women’s teams), with mandatory pit stops where the front tire of the tricycle must be removed and rotated.

The whole thing is completely ridiculous. Riders have to maintain contact with the saddle, which leads to many unusual positions in an attempt to go faster than other riders. The race has been covered in the past and there was publicity a few years ago. Having been a participant who had to push the corpse of my tricycle through the finish line after it collapsed under my weight, I will tell you that it is more fun to watch than to participate.

Apparently, the mini 500 was born out of the tradition of fraternities who hazed brothers on campus by having them ride tricycles to class. I couldn’t find any real proof of this but if so I would like to say that I prefer this form of hazing rather than making the kids drink until they collapse as hazing. .

The last tradition we highlight is the Ramblin ‘Wreck Parade. The Wrecks Parade has been a homecoming staple since 1932 (although it was postponed to 1942 and 1943 due to fuel shortages associated with WWII). The parade has 3 sets of cars that run from the McCamish Pavilion down Fowler Street to the corner of Russ Chandler Stadium on Ferst Drive.

The first set of cars in the parade are classic cars. The former students bring back old classic cars that they have restored or maintained to show them to the public.

The second set consists of fixed body cars. These are vehicles that have been cosmetically modified to match the theme of coming home that year. These cars are not floats and usually have physical modifications to the actual bodywork that are on display.

The final set, and the one that is best known, are the gear. A contraption is a vehicle (usually a literal wreckage of a car) that has been modified by students to operate without their original drive trains. This means that students must find a way to move the vehicle forward without using the components that transfer power from the engine to the wheels. A real engineering challenge.

The students have found very creative ways around this problem. Some use manual power by having undergraduates push a pendulum or spin a gear to move the car forward. Some people will use water tanks to push a workout that transfers momentum to the tires. Some students attached propellers to the motor to help pull the weight of the vehicle. The one-year-old students created a miniature jet engine to help drive their car forward with the car in neutral. This one is both fun to watch and to participate in.

Dude, coming home is one of my favorite times of the year. See all your friends and family and relive all the good times on campus. I can’t help but appreciate the feeling in the air when I return. I can’t wait to come back this year and see the Jackets take him to the Hokies. Go jackets !!!

How to start a travel blog in 8 steps

Biblical feast of femininity and the harvest | Jesus’ Creed