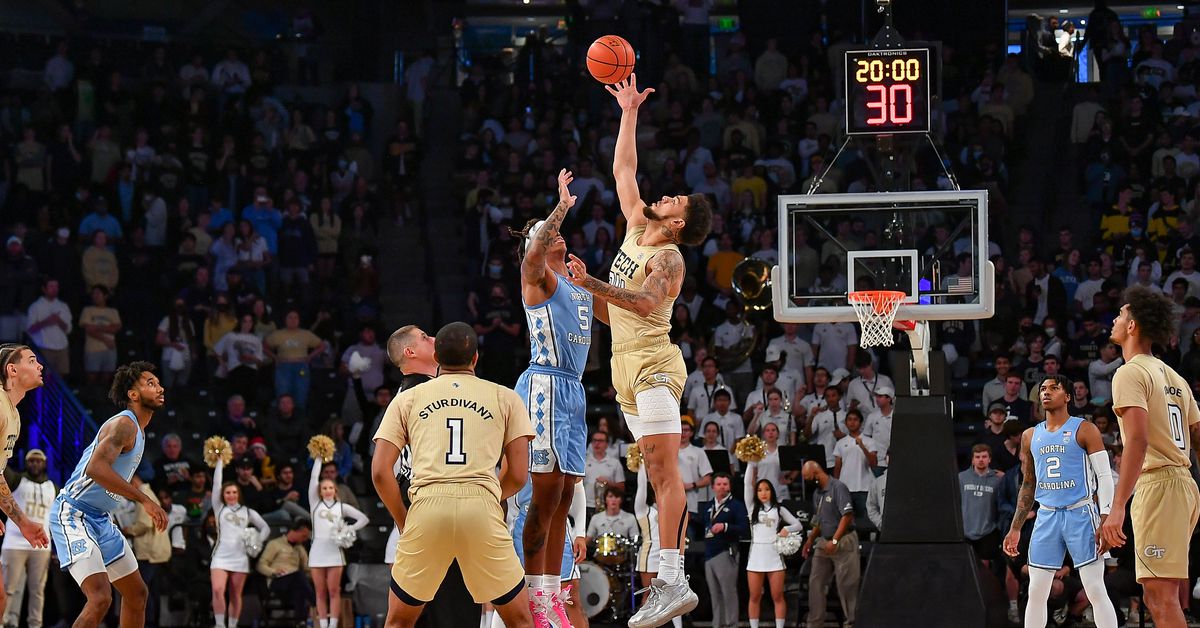 On Saturday night, the Jackets take on North Carolina, seeking back-to-back ACC wins. Before the game, we sat down with Brandon Anderson of the Tar Heel blog to get his insight into what he expects when the Tar Heels and Jackets face off in Chapel Hill.

FTRS: What are the current fan expectations for this year’s North Carolina team? They have flirted with a top-25 finish for much of the season, but only sit 1-4 against teams in Kenpom’s top 50. Hubert Davis?

I think Carolina basketball is going through a very strange transition right now. For the most part, fans expect to see a team that has improved a lot over the past two years. I believe there are some fans who still have Roy Williams-type expectations, which means they’re very “Final Four or bust” about the season. Given how talented this team is, I think the fans just expect the team to first compete in the NCAA Tournament, but also have a deep run in the tournament, although I would say things ending by a trip to the Sweet Sixteen would be really good to have a freshman head coach. So yeah, I’d say the opinions of what this team should and shouldn’t be able to do are all over the place, but mostly I think the fans just want this team to win the games they should be winning, and see what happens from there.

FTRS: Following the previous question, what are your first thoughts on Hubert Davis through only 15 games?

I think Hubert Davis is doing a great job so far. I know people have been very hard on the team for their defensive performances, but I feel like the problem is more consistency than anything else. Davis has an offensive plan in place that has made these guys one of the best perimeter shooting teams in the country, and junior great Armando Bacot is having a fantastic season despite not having the kind of attacking in the paint with him that we are used to. under Roy Williams. Everything felt more modern/makes more sense for the direction college basketball is heading, and that of course isn’t meant to be a dig at Coach Williams. I just think what Davis is doing is great for both short-term and long-term players, and hopefully things only get better from here and he can stick around for a long time.

FTRS: The Tar Heels are one of the best shooting teams in the country. What can the teams do or have done to counter this?

The answer to this question is difficult, because I feel like every game this season there has been a different guy who has dominated. Bacot is basically a constant, but I feel like when it comes to perimeter shooting, RJ Davis, Caleb Love, Brady Manek and Dawson Garcia have all taken turns destroying teams from deep. I feel like the game plan would be to disrupt the passing lanes and give them little to no room to shoot. It’s a lot easier said than done, but I think forcing the team to turn the ball around might be the best defense against a team that shoots as well as Carolina. I feel like if I can point to one team that was really good at both of those things, it was Kentucky. They completely dismantled our offense and kept the Heels to just 7.7% shooting from deep. It was a pretty miserable game, needless to say haha.

FTRS: In the last game between these two teams, Tech had no answer for RJ Davis, who has a very good second campaign? What other players should the Jackets watch this time around?

I think any concerns should start with Armando Bacot, who’s played in the lead all season. He’s gotten a lot stronger in the offseason, faster and playing like he has a huge chip on his shoulder. Caleb Love is also much better than he was last season, and he has become dangerous both from the perimeter but also attacks a bit from the edge. I would say that aside from Davis, these two players are the ones to watch.

FTRS: What are the greatest strengths of this North Carolina team? The biggest weak points?

I think we can safely establish that the strength of this team is shooting, but as far as weaknesses go, it’s definitely inconsistency in defense. Sometimes they just played very lazy on that side of the ball, and there really isn’t much other explanation for that. They both had games where they looked like a closed defense and also games where they seemed like they wanted to let teams score 120 points, so it’s been a roller coaster ride. I also feel like the heels sometimes come loose with the ball a bit, although they’ve certainly been a lot worse in the past. Currently, they are ranked 8th in the league in assist-to-rotation ratio and 10th in average rotation. If GT can wreak havoc when Carolina tries to operate their offense, I think that would put them in a great position to win the game.

FTRS: What do you think of Armando Bacot as ACC Player of the Year? What has changed in his game to make him even more impactful than he was last season?

I think Bacot is a great ACC POY candidate, but it’s hard for me to say he’s a lock to win it or something. I’ve been really impressed with a lot of people in the league this year, but I will say that Bacot definitely has one of the most impressive stat lines. I think in terms of his game, it really goes back to what I mentioned about his strength, speed and overall sharpness since last season. I think it also helps that former UNC player Sean May is now an assistant coach, who was the NCAA Most Outstanding Player for the 2005 National Championship team. He worked quite a bit with Bacot , and I think that also contributed a lot to what he did.

FTRS: What’s your prediction for this one? Who wins and why?

I hate this part because I haven’t had a single correct prediction during the football season haha. I think UNC is probably going to win this one, mostly because I think they’re just clicking on all cylinders offensively right now and I think they’re tired of getting cooked on defense. It’s really hard to believe they won’t be cooked, but what they did to Virginia only happens if you play checked because the Cavaliers are still a very tough team to deal with. So I’ll say the final score is 84-68, and I urge your readers to hound my Twitter account and drag me if Michael Devoe and Jordan Usher break us up.

Thanks for having me, and good luck to you guys!

Many thanks to Brandon for taking the time to answer our questions. Be sure to check out some North Carolina coverage at Tar Talon Blog.