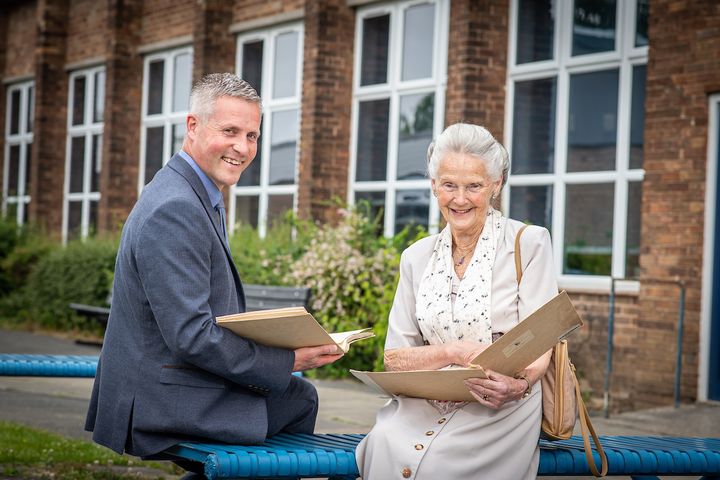 Sonia Ward, 82, the first Head Girl at Penwortham Priory Academy has returned to her old school to look around and see the changes since leaving.

Sonia was among the first group of pupils to attend the school which opened in 1953 as Penwortham Secondary Modern and despite all the changes since Sonia insists that the atmosphere and friendliness of the school are always the same.

Principal Matt Eastham invited her back to the school which was fitted out with a new science lab building, a humanities building, and a computer block.

During her visit, Sonia saw photos of her age group and time at school.

Sonia said: ‘They say your school days are the best of your life and I was happy at the Priory, I can’t see any student not being happy here because it’s an amazing school.

“I was Head Girl and Roy Rich was Head Boy. I spotted him in some pictures that Mr. Eastham showed me and I remember a lot of my classmates when I see their pictures. is so beautiful to see.

“I don’t know how I got the role of Head Girl. I think the manager and staff offered me, but I was honored to have it.

“I remember one of our duties as prefects was to search the school as pupils then had to leave the buildings at break and dinner and some were still trying to hide inside from the cold. Our job was to find them!

“We also helped new students get settled when they arrived and did a lot of the usual work.

“I came back many years ago for a reunion but then I started a family and started working at County Hall and this is the first time I’ve been back since. I can’t understand how amazing it is.

“There’s still the main building from when I was here, although obviously it’s been modernized inside and extended.

“That said, the basic layout of this one is still the same and I remember the main hallway and could point out which classroom was where. I remember the science labs were on the top floor and now they have their own building.

“I also asked if the bungalow where the girls did ‘Housecraft’ is still there. It was a place where we learned cooking and sewing. It still exists but it’s a storage place now.

“We did different topics, it was a different time. I liked sports the most and was on the rounders and netball team.

“Even though it’s changed, it still feels like Priory.”

Principal Mr. Eastham: “It was an absolute pleasure to welcome Sonia to Priory, to share our stories, review photos and discuss the development of the school since she was Prefect here.

“It’s especially nice to know that she still felt like she was back at her school, at the Priory, although she looked and felt very different from when she was a student here.

“Next year we will celebrate our 70e anniversary as a school, so we look forward to welcoming Sonia back as part of these celebrations as well.

How about a mother blog as, first, a person