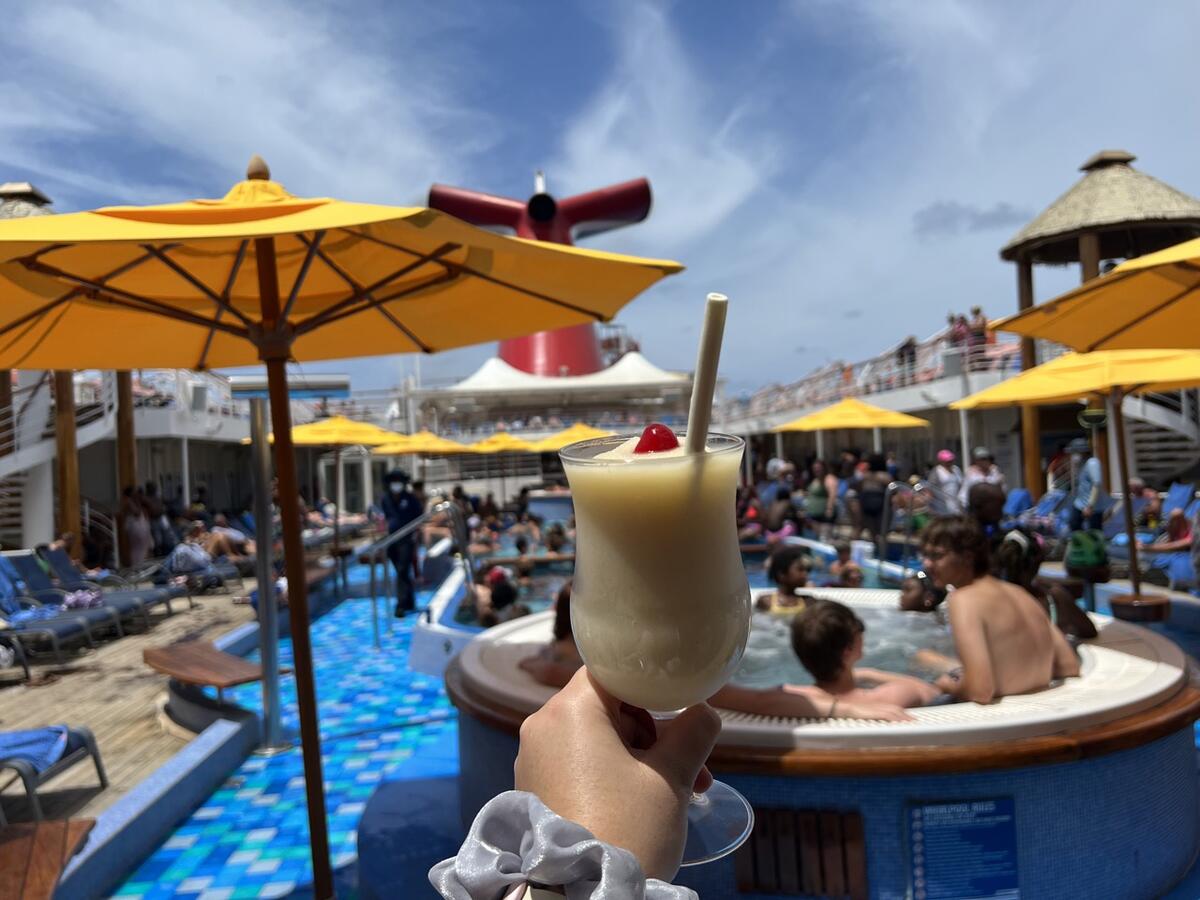 It’s our second day aboard Carnival Ecstasy and we’ve had an action-packed day exploring all that this spinster has to offer.

It almost feels like we entered a time warp back to the 90s aboard this ship. Everything is brightly colored with neon undertones everywhere you look. The ship was also not designed for easy navigation, as we constantly struggled to determine where we should go.

But, the ship has been well maintained and it feels very clean. We found our cabin and public areas to be clean, although the Ecstasy is definitely showing its age. I can’t blame her though – she’s the oldest cruise ship sailing between Royal Caribbean, Carnival Cruise Line and Norwegian Cruise Line.

The day started earlier than I expected, with the cruise director making several announcements that I could hear in our cabin, even with white noise. These must have started around 9am, which is quite early for a ship that encourages late-night parties.

The announcements were to play bingo, join the art auction, win a free excursion, and more. I could have done without the announcements, but they also continued throughout the day.

In fact, as I write this, another announcement has just dropped. The announcements also continue into the evening, some until 9 p.m. about fun events happening… You know what I’m not amused about? All those fucking ads!!

After waking up from the announcements, I did some work while Angie slept.

(And no, I didn’t see the tape that may or may not hold this window intact when I leaned on it for a photo).

Our morning started with brunch in the dining room. We’ve read rave reviews about the Carnival Sea Day Brunch, which is free, you guessed it, on sea days. It’s available until noon, which is great for those of us who want to sleep in ( but who were woken up by endless announcements).

We used the Carnival Hub app to check in for Sea Day Brunch and our table was ready within 10 minutes.

Typically we got lost trying to find the Wind Star dining room. Upon arrival we were seated immediately and were given a table right by the window.

The menu had all kinds of delicious dishes, from huevos rancheros to 12 hour French toast and omelettes. I ordered the fluffy skillet crepe with a side of bacon. To start, I also tried the croissant and the yogurt granola.

Angie tried the French toast and an omelette. We also ordered chicken and waffles to try.

The chicken and waffles were not our favorites as the waffle was overcooked and the chicken was boneless.

Overall Sea Day Brunch was a great experience and we will definitely be going back on day 4 which is also a sea day.

Angie needed to work in the cabin, so we went back there so she could tune in quickly. We have both been very impressed with the internet so far on the cruise which was a big surprise.

Once Angie finished some of her work, we decided to check out Serenity. This was located at the back of Deck 9 so we walked through the Alchemy Bar and Starlight Lounge to get there.

Interestingly, Serenity is tucked away on the back deck and difficult to access, but that means it’s quiet.

There were 2 hot tubs here with plenty of cushioned loungers. Again, it’s so hot outside that I can’t imagine the hot tub being nice.

We enjoy relaxing on some of the lounge chairs in the shade and there was a waiter who came to ask for drink orders.

The pool deck was very busy today with tons of people enjoying the pool and lounge chairs. The DJ blasted music with many people on the platform dancing together.

It was lunch time so decided to try Guy’s Burger Joint for a bite to eat. There was no queue, but I saw lots of people eating burgers around the ship. It seems to be an incredibly popular choice.

I ordered The Ringer, which has a fried onion ring and Guy’s secret sauce with super melty cheese. All burgers come with seasoned fries. I took the burger back to Serenity.

It was a delicious burger and tasted like high quality beef. They slipped pickles into the toppings (my nemesis) so I had to pull them out of my sight. The fries were also very good. It tasted like something I would get in a restaurant and definitely better quality than McDonalds or other fast food.

Another Carnival flagship is the Blue Iguana Tequila Bar. I went to the bar and asked what their most popular drink was. The bartender said “everything”, which is extremely unnecessary, so she got us a menu.

We chose to try the Red’s Caribbean Colada, which was a pina colada. Just realized there was no tequila so I probably need to go back and try a margarita to really do the bar justice.

However, the Caribbean Colada was very good and we both enjoyed it in the hot sun. To cool off a bit, we went inside and to the cabin to freshen up before High Tea.

I was delighted to see High Tea on the program, so we made sure to fit it into our daily itinerary. It was in the dining room and we were seated immediately with a view of the window.

It wasn’t very busy, which I expected. I could imagine that most people on board would rather drink on the pool deck than spend their afternoons having tea in the dining room. But, for us, it was a unique experience on a cruise that we had never had before.

Once seated they brought a small selection of teas. Then they rode on a trolley filled with a variety of desserts. They served us chocolate cake, lemon cake, macaroons, scones and cookies. Everything was delicious and it was a great experience.

Once we finished High Tea, we had 2 hours until dinner. We decided to check out the gym. The ship is small and there aren’t many places to walk around other than the upper deck. The gym was located at the front of the ship near the spa and had a nice selection of equipment to use.

Dinner at the song of the wind

After working, we had to get ready for dinner. Tonight’s theme was Elegant Night, and I was intrigued to see how the clientele would take to that theme. As I expected, there was a wide range of outfits for tonight. Some did it all and others showed up in their bathing suits.

The vibe is very laid back and laid back – honestly, I wouldn’t be shocked if someone walked into the dinner still in a bikini!

For dinner tonight, I ordered the prime rib with Caesar salad and pork tarts to start. Angie had the meatball soup for a starter and the spaghetti carbonara. We enjoyed our meal again, although our service was still very slow. We seem to be the anomaly, because everyone leaves before us.

Luckily we really enjoy our table and meet new friends during dinner. There was also a singing part of the dinner when one of the waiters got up and sang a song.

They dimmed the lights and everyone turned on their phone flashlights. Apparently there will be entertainment every night. It feels like a nightclub when they dim the lights, especially since this ship has a “big city lights” theme throughout.

As we were in the dining room later than expected, we were late for the evening show at the theatre. Tonight’s show was called The Brits with the ship’s singers and dancers. I wasn’t impressed, but everyone was talented and it was fun to watch for 20 minutes. I’m surprised the shows are shorter than I’m used to; they only last about 30 minutes. I actually don’t mind, as it gives you more time to do a variety of activities.

We heard from our dinner friends that the karaoke was a hoot last night so we headed to the Chinatown Lounge. There was a late start for fun, but we did see a few people take the stage and give their best performance.

After watching a few (bad) singers, we decided to give the comedy show a try since we enjoyed it last night. We were disappointed that the comedy show was the same as the night before, although everyone’s favorite rowdy grandma made another appearance!

She interrupted the actor and again showed her dance steps. In fact, the entertainment director had to escort him off stage several times. It was worth going to the show, even though the content is the same.

When the comedy show ended, we decided to go back to the cabin to blog and go to bed. We are in Cozumel tomorrow trying the Del Mar Latino Beach Club with an all inclusive day pass. The club can only accommodate 30 people, so we hope it will be a relaxing afternoon with drinks and food by the pool. It’s located within walking distance of the port which is really nice as it means we don’t have to pay for a taxi.

I feel like everyone is really having fun – which fits perfectly with the Carnival brand. It feels like people are mingling and making friends, which creates a more communal feel on board.

Angie and I realized that some schools started last week, which is why we may have gotten a cheaper cruise fare. There are certainly a lot of children on board, but not as many as I expected. Port staff said we were sailing with 2,200 people, but the ship sailed at full capacity for most of the summer.

The sea was extremely calm. Ecstasy is an old maid, so it doesn’t have very good stabilizers if we come across choppy waters. I am grateful that the seas were a sheet of glass and very calm. I hope this will continue for the next 2 days!