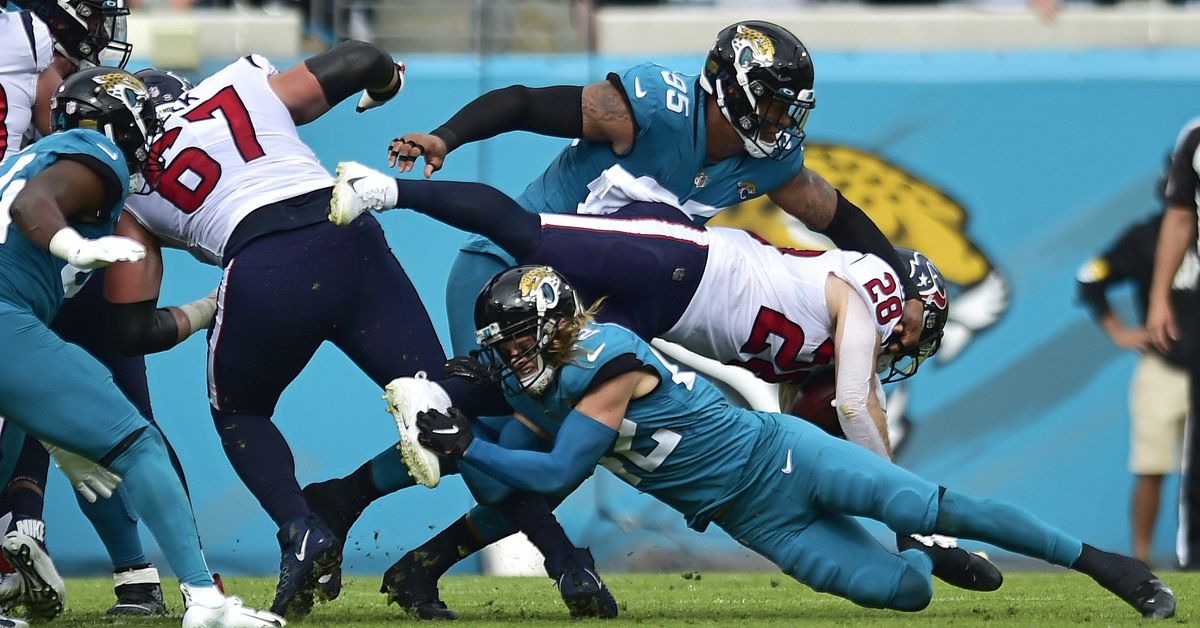 Bottom of the Barrel: Texans or Jaguars offense comparison

Two franchises from the same division have graced the lower crowds of the league’s doldrums for much of the past two decades. Each had their fantastic moments and seasons, but in 2022 none will be remotely competitive.

Since this is the reality we’ll be living in and Dr. Strange won’t be altering our reality anytime soon (not a spoiler, don’t worry), we should figure out who’s the worst as the season approaches. 2022.

Pundits lazily arguing over whether Davis Mills’ season was better than first overall pick Trevor Lawrence drove this comparison to the moon. Mills’ season was mired with putrid performances early in games and solid fourth-quarter points-in-time. Trevor Lawrence is the best thing to happen to Jacksonville since they reverted to their standard helmet and jersey combo. Lawrence should have a meteoric rise in offense from Doug Peterson.

Etienne’s injury in training camp last season crushed fantasy owners and Jags fans alike, but it made for another solid season for James Robinson. Their duo will be among the best in the league and a legit 1-2 punch. Although Pierce’s early whispers of being nominated for Offensive Rookie of the Year, he has yet to earn the job from Mack, who himself will be looking to relaunch his career in Houston. The Texans RB room has quite a few questions as the Jags are perhaps the most underrated in the NFL.

Cooks is by far the most talented and decorated wide receiver in this group. Beyond him, the Texans WR body is young and promising but woefully ill-equipped to scare away opposing defenses. The Jags have assembled a dynamic and diverse combination of receivers. Christian Kirk has been underutilized his entire career and all Marvin Jones needs is love and affection from his QB. Laviska Shenault is an all-around WR and a headache for defenses. This group will have pretty even receptions and targets, which will have defenses scrambling to come up with a game plan. Their talent and depth far surpasses the Texans

A fairly balanced comparison. Evan Engram was the bane of Giants fans for five years. A Pro-Bowl for the tight first round, that’s all he can hang his hat on. He’s yet to go 700 yards since his rookie season and regularly disappears from games. The Texans Brevin Jordan had a promising second half of the season after missing the first seven games. He’ll be a great pass-catching option, but his lack of run-blocking ability will limit his potential. There’s hope for a ton of cliches in Pep Hamilton’s TE-heavy scheme, but the arrival of Evan Engram, Dan Arnold’s consistency and Pharaoh Brown’s mediocrity once again give the players the balance. Jaguars.

Ah, we got to a position where the Texans are superior. That’s if Tunsil decides to play this season…then it’s the Jags again. Tunsil was convinced by the technical staff to stay this season and not be traded, which will be a blessing for the attack. Cam Robinson and Japan Taylor have both matured into quality tackles, but between the pass blocking abilities of Tunsil and Howard, they surpass anything the Jags can offer.

Adding Kenyon Green to this group will be key to the Texans’ success. Cann’s ability is a relative mystery to all, so the combination of a rookie and a question mark doesn’t bode well for the inside. Ben Bartch had a fantastic season last year for the Jags, starting 11 games in his third season with the team. The Jags went all-in on Scherff as a right guard this offseason to plug the last remaining hole on their offensive line. Scherff’s $49.5 million contract is a heavy price to pay, but if it means keeping Lawrence healthy, it’s worth its weight in gold.

After longtime vet Brandon Linder retired, the Jags drafted Luke Fortner from Kentucky in the third round. Well-respected and seasoned, Linder should replace them. But Britt is one of the most experienced and quality centers in the league when healthy. Britt will be competing with Jimmy Morrissey, but if he’s ready to step into the role, it will be a big boost for the offense.

For what it’s worth, at least the Jaguars have a worse owner than the Texans…sort of

The Jaguars offense is young, talented and deep. If they can put it together, they will dominate some teams. Especially with a better Trevor Lawrence this season, the Jaguars could be sneaky. The Texans’ much-improved offensive line will be a huge advantage, but the lack of offensive weaponry diminishes the talent the Texans might have at QB.

We’ll be comparing defensive side of the ball later this week, so stay tuned for the full review.

Local guide to what to do in Sitka, Alaska