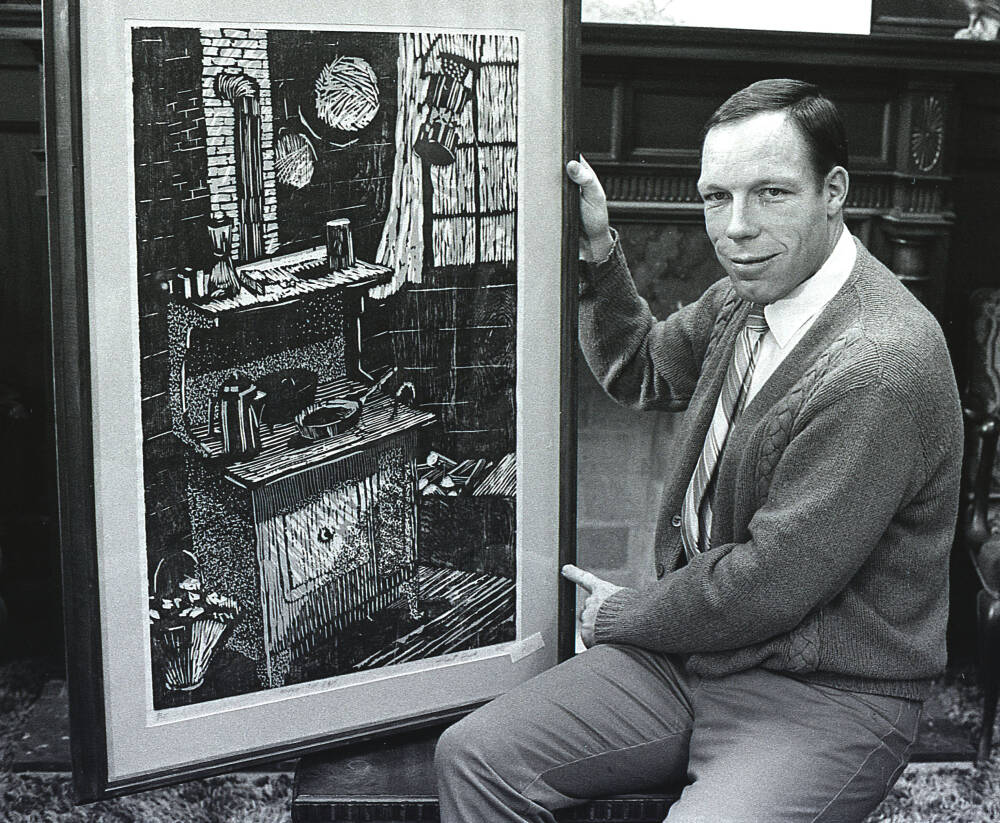 In the fall of 1971, the Southeast Missourian was preparing for its 25th annual art exhibition, turning its newspaper offices into an art gallery and inviting local residents to come and enjoy it.

One of the newcomers to the Cape Girardeau art scene that year was Grant Lund, an art professor at Southeast Missouri State College. His contribution to the Missourian art exhibition earned him a front page report on November 18, 1971:

WOOD BLOCK PRINTS BRING THE STRENGTH OF THE “MAVERICK” ARTIST

A lot of things – and emotions – are behind the works of Grant L. Lund.

“I’m kind of an art maverick,” says state college assistant art professor who will exhibit two large woodcuts this weekend on the occasion of the silver anniversary of the Missourian Art exhibition.

The newly arrived Cape Girardean has crammed a variety of jobs, interests and residences over his 34 years. But sees himself above all as an artist.

Mr. Lund’s label of “maverick” stems in part from his broad interests in the visual arts. He did not stop on a subject or a medium

He is very interested in painting – in oils, watercolors and other media – and enjoys drawing and photography. He is also a sculptor.

But his first love is printmaking, especially from woodcuts of his own creation.

Mr. Lund also considers himself a “maverick” as he plays both the roles of artist and instructor, uniting them where possible.

He shows great interest in the efforts of his young state college artists, but does not allow his class work to transcend his more personal role as an artist himself.

Coming from Pennsylvania to Cape Girardeau just a few months ago after spending much of his life in the West, Mr. Lund’s inquisitive eyes constantly search the region for new subjects to capture on wood, rice paper. or canvas.

Usually smiling and chatty, her calm personality hides the strength of her creative feelings, such as her experiences which resulted in “Sins”, a 22-by-33-inch print that will be in Th Missourian Exhibition.

“I have always been interested in religion and in awe of religious artwork,” says the Mormon from Utah who was once a missionary with The Church of Jesus Christ of Latter-day Saints.

“Sins” is based on “the concept of mercy and justice as taught by the Bible,” says Mr. Lund. The print shows a character rejecting his sins.

“If you don’t cast them (sins) away, you have to put up with them yourself,” he said, looking at the austere impression. “If you repent, you fall under the spell of mercy rather than the spell of righteousness.”

“The Modern Old Days,” his other impression on the Saturday-Sunday show, also has special meaning for the artist – and for his wife Marcia.

“I broke my wife on this stove,” he says of the old stove that is in the footprint of an old-fashioned kitchen.

The idea for the print came from a cabin in the wilderness where, as newlyweds, Mr. and Mrs. Lund lived while working the summer for the US Forestry Service in the scenic Ruby Mountain region of Nevada. .

They enjoyed it so much that they spent two more summers there, working on fire and trail crews.

Much work is devoted to prints bearing Lund’s signature.

In the beginning is an idea. “I think about a print long before I start drawing,” says Lund. From the drawings, he traces an image on a piece of wood from which an impression will be made – by hand – on special paper.

Mr. Lund spent “between 20 and 30 hours) carving with various tools the wooden blocks from which the two prints in the Missourian art exhibition were made.

Due to their large size, two pieces of wood were needed for each block. After sculpting, chiseling and sanding, the pieces were nested and glued together.

Then the impression emerges. Mr. Lund does not use a printing press. The paper – he prefers rice paper – is placed on the inked block and rubbed with a special tool.

One of a kind

He makes as many prints as he wants but usually produces “limited editions”. The imprint of “Sins” is one of a kind – this is just the proof.

Mr. Lund has participated in art exhibitions for over a decade and taught for eight years. He holds a Bachelor of Science in Art from Brigham Young University in Salt Lake City, Utah. He also has an MA in Fine Arts and studied toward his doctorate at Penn State University in State College, Pennsylvania, where he taught printmaking before coming to Cape Girardeau. He hopes to complete the requirements for his doctorate next summer.

His obituary in Southeast Missourian described his legacy: “He will be remembered as an artist, educator, father, grandfather and husband who loved to engage everyone in his passion for how people come together. relate to art. “

Overcome the winter blues by taking care of yourself

Intel CES 2022 Live Blog On the Road to the Future – What’s in store for Team Blue?