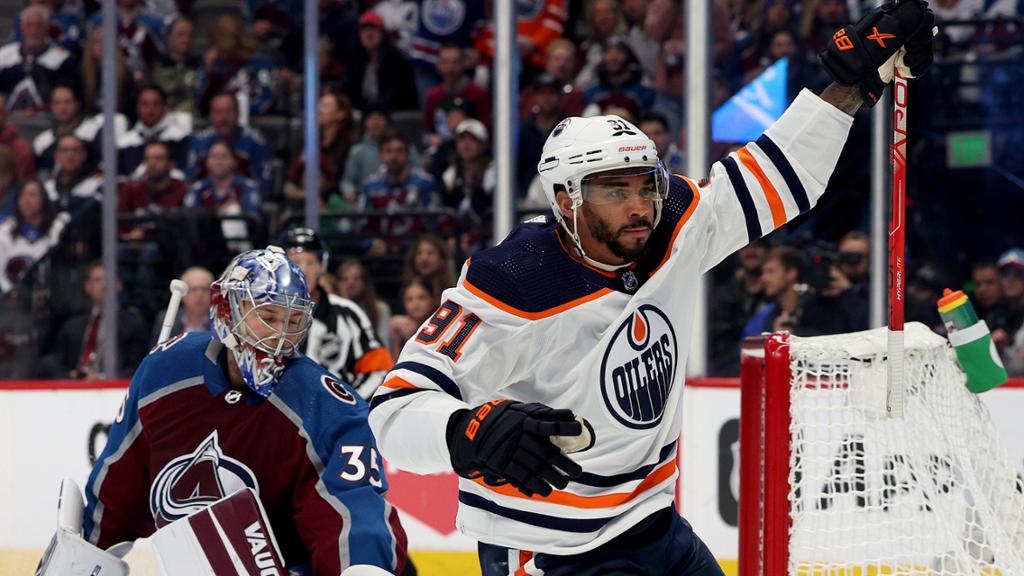 The Oilers have officially inked the sniper on a four-year extension Wednesday, bringing the NHL’s top playoff scorer back into the fold for the foreseeable future. The biggest factor in Kane’s desire to put pen to paper was his desire to win.

“It’s the first real chance where I’ve been free to choose where I want to play,” Kane said of the deal. “The guys, the team and the organization seem to fit together very well. I was a winning player my entire career until I got to the NHL and I want to make sure I achieve that goal. I believe I can do it in Edmonton.

Kane was a revelation when he joined the Oilers on Jan. 27, scoring 37 goals in 58 regular season and playoff games. His blend of offensive acumen and physical drive was a perfect match for an Oilers team that needed a spark midway through the season.

“Everybody in that locker room wanted him back and made that very clear to me,” Oilers president of hockey operations and general manager Ken Holland said. “They felt we were a much better team with Evander on our team.”

“He was around a 25-30 goalscorer before he got here, he found great chemistry with Connor and Leon and was on 45-goal pace with us,” Holland added. “He brings an edge to his game, a certain personality and physicality. It’s not just the ability to score goals, the other dimensions he brings to our team are also very valuable. I wanted to find a solution that please Evander, and I was comfortable with a four-year contract.”

There’s a reason Holland was comfortable with the contract Kane would end up signing.

After a quick look at the deals that were signed at the NHL Free Agency opener, it’s hard to say the Oilers ended up with anything other than a bargain. Kane’s AAV was lower than what unrestricted free agents Andre Burakovsky, Claude Giroux, Andrew Copp and Vincent Trocheck were inked for – and comparable to contracts signed by Ilya Mikheyev, Rikard Rakell, Mason Marchment, David Perron and Artturi Lehkonen .

The argument can be made that Kane is the top scorer in the group, but his decision to potentially leave dollars on the table was admittedly deliberate.

“I want to win, and to win you have to have more than one or two players,” Kane said. “I think it gives our group the best opportunity to be able to put more pieces in place to give us the best chance of succeeding. I was willing to take less than I believed and showed (for worth it).”

With the addition of Kane, the Oilers now find themselves with a solid core around two of the best players in the world in Connor McDavid and Leon Draisaitl. The chance to play in one of the best buildings in the league, alongside two of the best players in the league, has always drawn players to Edmonton. Now, after a trip to the Western Conference Finals, a shot at hockey’s holy grail adds another feather in the Oilers’ cap when it comes to attracting players of Kane’s ilk.

“When the players come here, they think it’s a fabulous place to play,” Holland said. “There’s a huge passion but more importantly you want to win and I think having the core that we have has certainly made people in the league come here and join them.”

Now that the Oilers have secured Kane in their core, the Stanley Cup is the next step for an Oilers core that found themselves in the NHL’s bottom four teams last season. Kane was asked at Wednesday’s press conference how long he expects the Oilers’ Stanley Cup window to last.

“I hope that’s the length of my contract here,” he joked.