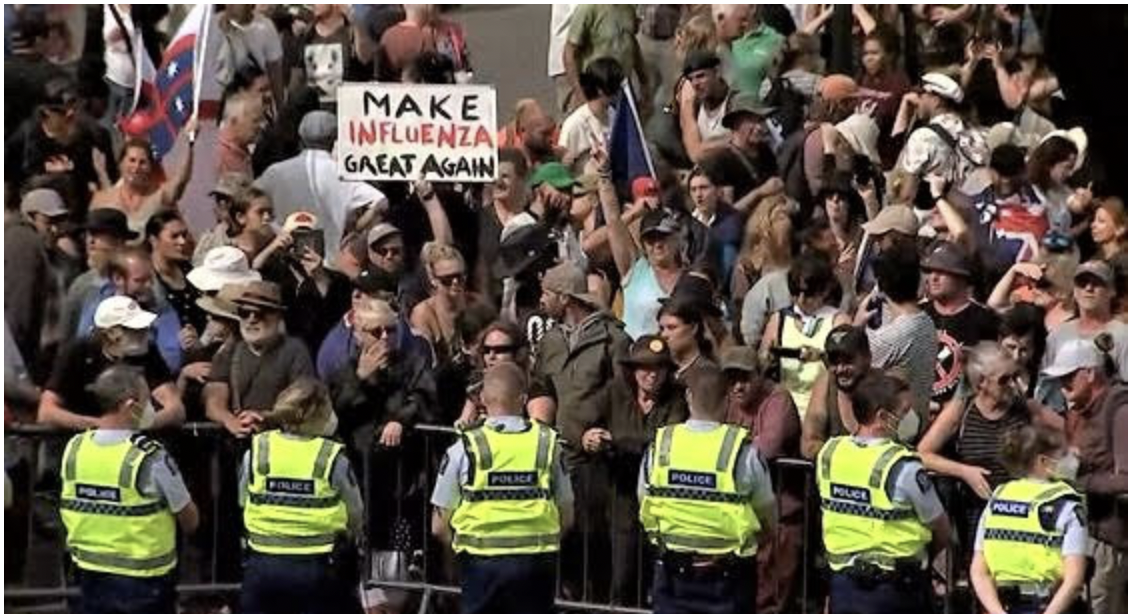 IT IS HARD to understand the police tactics on display today (02/10/22) outside Parliament. What is the goal of police commanders? To empty the parliamentary precinct of protesters, remove their tents and Portaloos, tow the cars and trucks that block the streets of central Wellington? Or are the tactics deployed more concerned with the “look” of the operation. Is the purpose to show New Zealand how vastly different our modern police force is from the baton-wielding riot squads of forty years ago?

If that was the “look” they were going for, then they certainly achieved their goal.

Police commanders in other jurisdictions, watching live streams from New Zealand on their computers, must have shaken their heads in disbelief. Police officers in shirt sleeves, unhelmeted, insufficiently masked facing a crowd of unvaccinated citizens and deployed in insufficient numbers to effectively enforce the law, faced a crowd of several hundred defiant people.

The tactic, described by Wellington District Commander Corrie Parnell as a “graduated response”, appeared to involve regularly pushing protesters back and out of Parliament and into the streets. This had to be done without the use of any of the crowd control equipment available to officers overseas. There were to be no shields, no pepper spray, no tasers, no truncheons, no tear gas, no rubber bullets. Arrests were permitted, but since it took at least two – usually four – police officers to subdue each protester, handcuff them and take them away, it soon became apparent that the process was unlikely to reduce the size of the crowd quickly. Indeed, the hours passed, and the number of demonstrators remained fairly constant.

This inability of the police to make a serious impression of the size or intentions of the crowd, combined with public awareness of the risk of infection posed to front-line officers, very quickly changed the “look” of Operation dramatically police.

Far from being impressed by the police restraint, those watching the live streams began to feel angry and frustrated by the utter ineffectiveness of the tactics employed. Police commanders seemed paralyzed. Unable to withdraw, but refusing to deploy the personnel or crowd control measures necessary to end the demonstration. All the public saw was a crowd of anti-vaxxers successfully challenging a New Zealand police force that couldn’t or wouldn’t force them to disperse. The message conveyed was not that of a sober and compassionate police force, but effective. Everything the New Zealand public saw was weak.

A state can be defined as a set of institutions having a monopoly on the exercise of political control – a monopoly made possible by its exclusive access to the means of organized violence. No state can afford to give its citizens the impression that it has neither the means nor the will to use violence against those who challenge it. Why? Because those who turn to the state’s “body of gunmen” for protection against disorganizedviolence will become alarmed. And those who would seize the authority of the state for their own ends will grow bolder. That is why, like it or not, the state has no choice but to vigorously defend itself when challenged.

Paradoxically, the greater the vigor with which challenges to state authority are addressed in their first manifestations, the less likely it is that serious, possibly deadly, force will be required to resolve them.

The Canadian model of the “Freedom Convoy” which is currently challenging the New Zealand state is a good example. By refusing to immediately evict truckers from downtown Ottawa, using overwhelming police force, Justin Trudeau’s government has only encouraged protest organizers to step up both their disruption and their demands. – to the point where Canada’s entire economy is constricted at its border crossing. chokepoints, and protest organizers are demanding the resignation of Trudeau and his government. It is difficult now to see the rapidly escalating crisis in Canada being resolved without the intervention of the Canadian Armed Forces. Tragically, Canadians will end up killing Canadians.

New Zealand prides itself on the fact that its political leaders are prohibited from directly intervening in matters of operational policing. Alright, we don’t want politicians giving orders to the police.

But that doesn’t mean a government should remain indifferent to what most of the public would view as a serious dereliction of duty by senior police commanders.

That the grounds of Parliament have been occupied by demonstrators who have obstructed public roads, harassed innocent bystanders, closed commercial and administrative premises, refused to obey legal instructions and reacted violently to all attempts to advance them , is a situation that should not be allowed to continue. With the police seeming to interpret the “right to protest” as an open invitation to protesters to ignore the rights and freedoms of their fellow citizens, the Prime Minister and her office have a duty to make it clear to Police Commissioner Andrew Coster that this affront continuous: both the symbol of our democracy; and to the rule of law itself; must be ended – now.

Let’s see what “a state of coercive action” looks like.