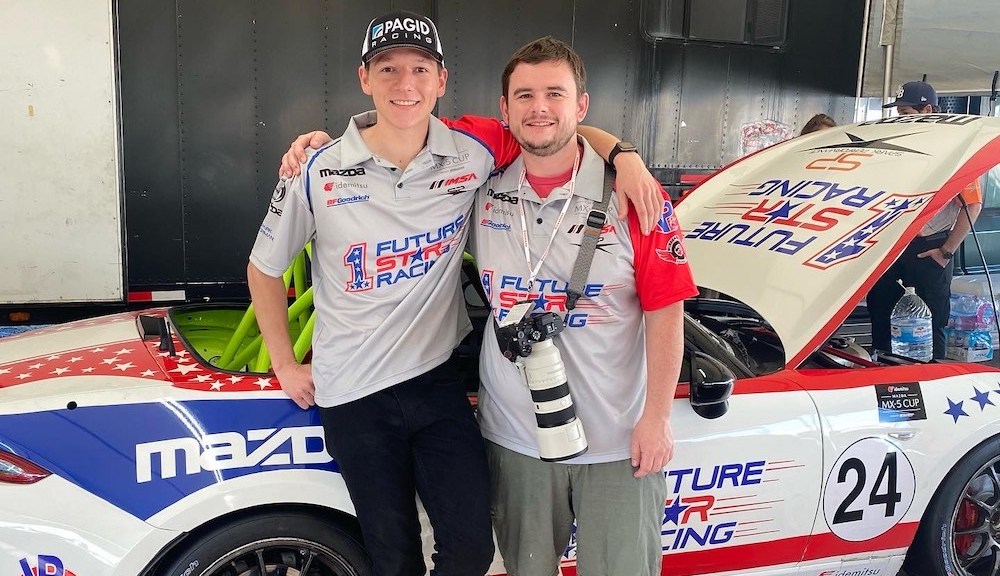 Travel hasn’t slowed down this year. As some of you may know, I moved from Louisiana to Indianapolis in 2020 after winning the Mazda MX-5 Cup Shootout (and Hurricane Laura). During my year and a half there, Indy felt more and more like home. Living there and racing an entire season in the Idemitsu Mazda MX-5 Cup presented by BFGoodrich Tires was just the opportunity I needed to learn and keep pushing for the next stage of my racing career.

It has been difficult each year to muster the necessary support and funding to continue racing. Thankfully, thanks to programs such as the Team USA Scholarship and the MX-5 Cup Shootout, I was able to climb the professional ladder quickly. However, it remains a big challenge at this level. I was very fortunate to have the opportunity to partner with Future Star Racing for the 2022 MX-5 Cup season with last year’s championship winning team, Spark Performance. Future Star Racing helps support talent at the next level of motorsport who otherwise lack the resources to make it happen. I do my best to use this platform to do just that!

The first two events in Florida were tricky for us. Daytona was a solid performer across the board, but fell short of the much needed points after an unavoidable incident in race two put us at the back with very limited green flag laps to follow. We unloaded fastest of all at St. Pete. That being said, in the MX-5 Cup, the speed margin to 20th position was only one second. A crazy qualifying session with a few green laps and some contact got us (along with several other contenders) going quite far in both races.

The first race was hot and many riders burned their brakes and increased their temperature. These machines are reliable, but we certainly put them through their paces in constant draft with little airflow and tons of bumps and curbs everywhere. I saw 12th after being spun in race one as a decent result and a comeback from qualifying. Starting higher in race two (10th) we saw this as a podium opportunity with a fast car. At the start, a rider who started more than 10 positions back missed the braking point in turn one, hit the ninth-place guy in me, and he started rolling down the track. Fortunately everyone was fine, but now I had a deep hole from 25th position to get back on a very difficult track to pass.

From there it was a race of patience for me and after lots of overtaking and mistakes from other drivers we finished the race in eighth place! Just like Daytona, we flew under the radar and didn’t get the points we wanted to be championship contenders, but we know we have the pace to race ahead and fight for wins. It’s really helpful to have multiple champions around me on the team. Gresham Wagner was the series champion last year and is almost always a contender for race wins, and Nathanial Sparks is not only the team owner, but won the drivers’ championship himself in 2016.

In March, I left my home in Indiana and started a new journey. I packed as much as I could into my car and drove 36 hours in two days to California. My cat, Morty, turned out to be an angel for 35 hours…

I never thought I would end up here, but I found myself constantly being pulled to a race track somewhere. Coaching and driving fill my schedule here more than ever. I also feel like I fit right in with the West Coast car/racing community and it’s always a good time. Morty also appreciates all the Spec Miatas that come in and out of the garage!

I was able to fill in the gaps in the pro race schedule with regional Spec Miata races. In three weekends (at Thunderhill and Sonoma Raceway), we had multiple wins and pole positions, including a 0.001 second photo finish on the line with my teammate. We had to review the finish with SCCA because it was so close!

It’s been a long MX-5 Cup season since St. Pete in February, so I made time last weekend to go to the IMSA event in Laguna Seca. It was nice to enjoy a few races from the comfort of the Lamborghini Super Trofeo welcome center (thanks, Chris Ward!), although I wish our series were there as it has become my favorite tracks in the country . It was a great experience to meet several teams and see the race up close live from the pit lane! Great meals and ice cream in the hospitality area was the icing on the cake.

Next on the calendar is the Idemitsu Mazda MX-5 Cup presented by the BFGoodrich Tires event in Mid-Ohio May 13-15. Based on our speed on our last outing at St. Pete, I’m confident we can get through the gate fast again and fight out front.

Thanks to Future Star Racing for the opportunity to return to one of the best racing series in the country. I believe this is the place to be to become one of the next best sports car drivers.

As always, thanks for reading,
Aaron